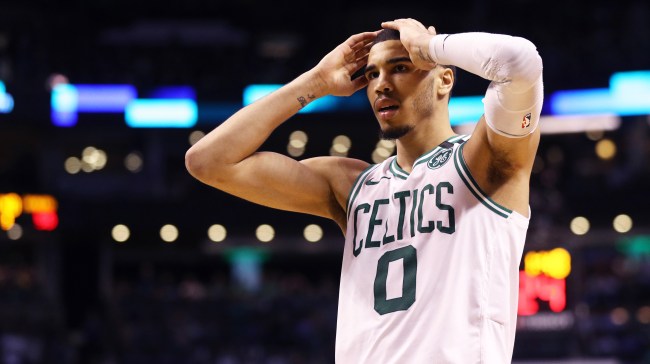 Jayson Tatum plays professional basketball for the NBA’s Boston Celtics. He was also born and raised in the city of St. Louis, Missouri.

The St. Louis Blues defeated the Boston Bruins, in Game 7, in Boston, Wednesday night to win the city its very first Stanley Cup, 52 years after the team began play in the NHL.

You can see how this turn of events might create a bit of a quandry for the 21-year-old Celtics forward. Not that it should have, but sports fans being sports fans, it did.

Because when Tatum celebrated the Blues long-awaited NHL championship, Boston fans were definitely not in the mood for it.

“Listen I got nothing but love for the city of Boston and the bruins!” Tatum wrote on Instagram. “But St. Louis will always be home I can never go against the grain! Where I’m from there isn’t much to celebrate or be happy about! This brings the city joy and brings positive attention that we rarely ever get! With so much negative attention for many different reasons it’s rare we get this opportunity. With that being said CONGRATS to @stlouisblues ST LOUIS WE LIT!!!!!!!!”

Then the very rational negative comments came, and immediately drew an audience.

I came here to read the replies pic.twitter.com/egvjo8xFUd

Give me Anthony Davis for this guy

you can hit the bricks with Kyrie

Have fun in new orleans

This some sort of joke to you

Send this chump to New Orleans

In fairness, a lot of Celtics fans did not completely lose their minds after seeing Tatum’s messages and were very gracious losers.

Congratulations my dude! Great city that deserves it!
Hope the A-hole C’s fans coming at you for rooting for the Blues doesn’t get to you, some of us love you as a player and a man that always remembers and represents where he comes from! Nothin but love JT! ☘️☘️☘️

Ignore these salty bums, you’re the future of the Celtics. Go celebrate the win!

We’ve seen 11 championships since 2001 guys. It’s all going to be ok. @CityOfBoston

Yeah, I think they will be okay. A lot of us out here would kill for our teams to just be good enough to finish second.