After Texting His Phone, Jayson Tatum Is Now Getting Roasted For Literally Cosplaying As Kobe Bryant 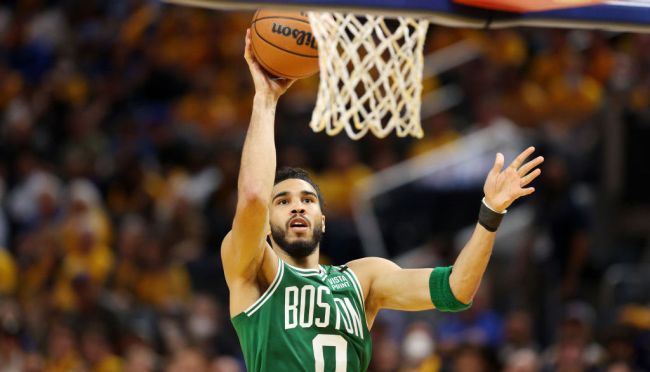 Last week, we brought you the story of the NBA world having a laugh at Jayson Tatum’s expense after the Celtics’ All-Star forward revealed that he texted the late Kobe Bryant’s phone prior to Boston’s Game 7 victory in the Eastern Conference Finals. Tatum had previously texted the late Bryant’s phone saying “I got you” prior to the Celtics’ win over the Miami Heat in Game 7 of the East Finals

Tatum obviously wasn’t deterred by being clowned on, though, as the 24-year-old was photographed dressing exactly like Kobe Bryant once did during the Celtics’ practice session on Saturday.

Is it going to help him not shoot 3-17? I mean this is just getting silly. Be your own player JT, sheesh. https://t.co/KyjMkZ9zkr

This is weirdo behavior https://t.co/Zuxv9ZovPh

He is inching closer and closer to being this guy…. https://t.co/YOVtLsQ2ms pic.twitter.com/55DpC9MaKo

Someone tell this fool he ain’t Kobe and this mad corny https://t.co/EovHzdEFkD

can he just tear an ACL this annoying asf lmao https://t.co/tmJsFkzCEm

They must be stopped https://t.co/4Fy2MK5Lx2

I don’t care who it’s gotta be, the nba, the media, the celts, the lakers, the commissioner, president biden, somebody, SOMEBODY has gotta end this wack ass narrative https://t.co/eVSD6BwYmV

We get it man https://t.co/iWSvKeUiLt

Tatum and the rest of the Boston Celtics will look to take a 2-0 advantage over the Golden State Warriors in the 2022 NBA Finals when the two teams face off tonight at 8 p.m. EST. He certainly better hope he plays more like Kobe Bryant in Game 2, as the Celtics star had just 12 points in Game 1 on 3/17 shooting.

RELATED: Jayson Tatum Is Getting Roasted For Sharing A Screenshot Of A Text He Sent To Kobe Bryant Prior To Game 7