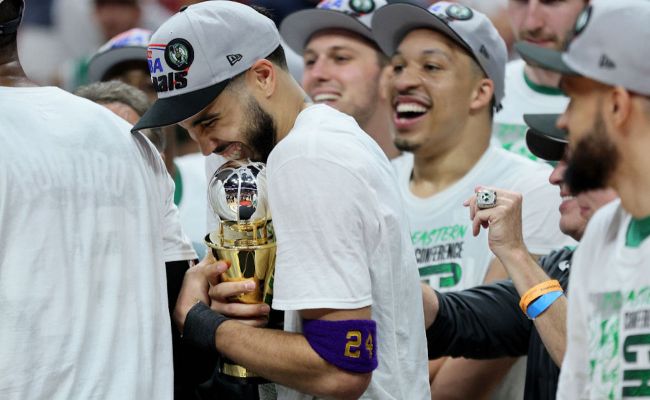 Jayson Tatum, Jaylen Brown, Marcus Smart, Al Horford, and the rest of the Boston Celtics — the Eastern Conference’s #2 seed — punched their ticket to the NBA Finals on Sunday night with a road win over the #1 seeded Miami Heat, beating Jimmy Butler and co. by a score of 100-96.

The win is being hailed as a crowning moment in Tatum’s career, as the 24-year-old forward — who averaged 27 points, eight rebounds, and four assists per game this season — has long been considered one of the league’s up-and-coming superstars.

to it during the game, an obvious tribute to the late, great Kobe Bryant, who passed away in 2020. The pair had a relationship prior to Bryant’s tragic death, with the pair famously working out together during the summer of 2018.

In addition to the armband, Tatum revealed that he also texted the late Lakers legend prior to the game, simply saying “I got you today.”

The reaction from the NBA world, though, perhaps isn’t what Tatum expected, as some fans seem to think he’s doing a bit too much by making this public. And that’s the price of being an athlete, isn’t it? While we’re certainly all posted something borderline cringeworthy online, when someone of fame does it, everyone takes notice.

Would’ve been more wholesome if he kept it to himself but the fact he posted it for everyone to see shows he’s making it about himself.

This is fucking lame. https://t.co/Y1ml6iQax0

Not only is it cringe to do this but bruh really went and posted the screenshot https://t.co/5yKvXyXmOV

I have been cringed to death. https://t.co/48OvLFcpDB

Him texting him is cool. Posting the screenshot is weird tho https://t.co/8fTdmHUfpL

I hate calling shit corny, but yeah this a bit too much even for me lmao. https://t.co/maKbCwbwgA

This is extremely weird https://t.co/qayaLtgYHw

I’m sorry but this is corny and tacky af, let that man RIP https://t.co/bvJvdRYC3k

The Celtics will head to California to take on Steph Curry, Klay Thompson, Draymond Green, and the Golden State Warriors for Game 1 of the NBA Finals, which tips off on Thursday at 9 p.m. EST.