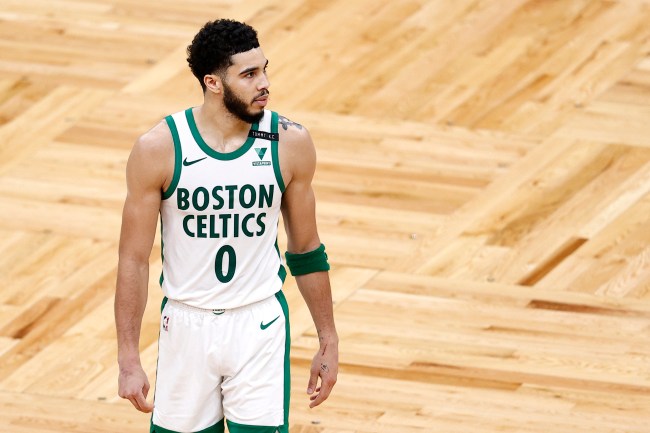 Boston Celtics star Jayson Tatum has revealed that having COVID has caused him to make a massive change to his pregame routine, as he told reporters following Tuesday’s 116-115 win over the Portland Trail Blazers that he now uses an inhaler before games, which is something he never did prior to having COVID-19.

“I take an inhaler before the game since I’ve tested positive,” Tatum said. “This has kind of helped with that and opened up my lungs and, you know, I never took an inhaler before. So that’s something different. I for sure feel better now than I did a month ago.”

Tatum, 23-years-old, first tested positive for the virus on January 9, which led to him missing close to three weeks of action before returning to the lineup on January 26.

Despite the fact that Tatum has been back playing for over two months now, he says he still does not feel at “100%”:

“Close [to 100%],” Tatum said. “I for sure feel better now than I did a month ago. There’s no exact timetable. [It’s] just when I feel comfortable enough and I think I don’t need it.”

100% or not, Tatum has been absolutely balling recently. Over his last 10 games, the fourth-year forward out of Duke Universit is shooting just under 50% from the field, just under 40% from 3-point range, and is averaging 29.4 points per game, putting his season average at 25.9 points per game, which is good for 12th in the league.

As a result of Tatum’s play, the Celtics have gone from fighting for the eighth seed in the Eastern Conference to holding the fifth seed. If you’re a Celtics fan, Tatum’s run is certainly promising, as it suggests he’s hitting his stride, and perhaps hitting “100%” health, at the right time, with the 2021 NBA Playoffs set to begin in just about a month on Saturday, May 22.