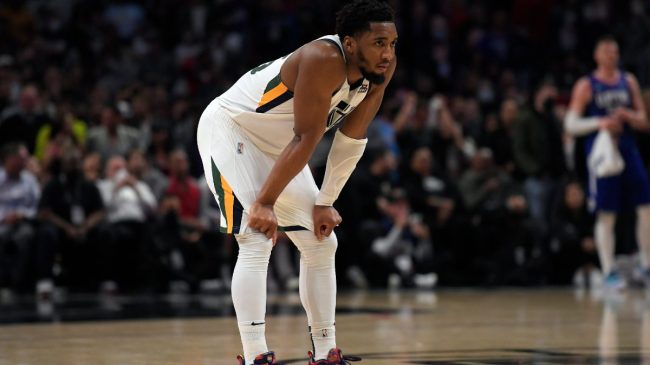 The Mavericks landed a decisive win in NBA playoff action to take a 3-2 series lead over the Utah Jazz.

That’s when things went from bad to worse for Utah.

Not only did the team suffer an embarrassing loss to fall one game closer to elimination, but the Jazz also saw star player Donovan Mitchell leave the contest with a late injury. He was removed from the game with less than five minutes of action remaining.

It begs the question, why was Mitchell in the game at all?

He’s easily the team’s best player and the most dynamic scorer. While he had a rough night shooting the basketball on Monday, Utah likely needs him to play in order to avoid having their season end in Game 6.

At the time of his exit, Dallas was leading the game by nearly 30 points.

Fans are now giving the Jazz coaching staff some heat for keeping Mitchell in during a blowout loss.

Fans Crush Jazz For Leaving Donovan Mitchell On The Floor

With Donovan Mitchell going down with an injury, fans are going after the Jazz on social media. The loss of their best player could compromise the remainder of the season if he’s unable to go at 100% in Game 6.

Jazz down 28 with 4:41 left and Donovan Mitchell not only on the floor for some reason but now headed to the locker room with what appears to be a leg injury.

Donovan Mitchell has gone to the Jazz locker room in the fourth quarter with an apparent leg injury.

He just limped off the court with an apparent hamstring injury pic.twitter.com/sGZdtKi87z

Donovan Mitchell just limped off the floor rubbing his left leg. Jazz down 28.

With the season on the line, Mitchell has said he’s going to give it a go on Thursday. When asked if there were any concerns about Game 6, the guard responded, “I’ll be fine.”

Donovan Mitchell said his hamstring tightened up and he had to come out. Concern about Game 6? “I’ll be fine,” he said.

Hopefully he’s playing at full speed because the Jazz will need him if they want to come back from this 3-2 deficit.