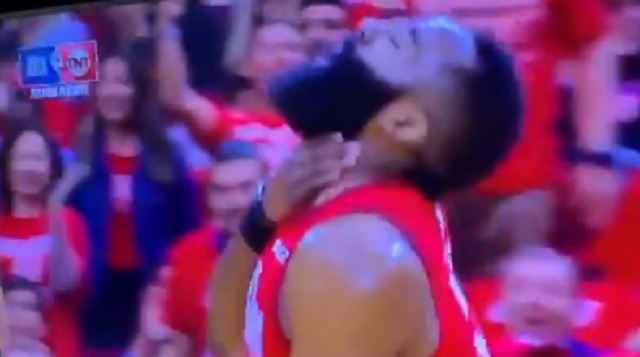 The Houston Rockets have taken a commanding 3-0 lead against the Utah Jazz last night despite the fact that James Harden started the game 0-15.

Harden started the game 0-15 from the field.

Rockets still got the W 😮 pic.twitter.com/i2F0jR0Dlv

While Harden has played remarkably well for more most of the series, Jazz fans still think he’s nothing more than a flopper.

Before last night’s game, Jazz fans accused Harden of committing an egregious flop during game 2 of the series when he grabbed his throat despite the fact it appeared that Joe Ingles didn’t touch him.

James Harden is tough they say. Break down this play for me. pic.twitter.com/tlS940oXLj

This live action replay is more obnoxious to me:
-He stops playing d
-Reengages when the play doesn’t end
-Waits for all eyes to be on him
-Asks out of the game
-Calls timeout
-Fresh as a daisy upon re-entering the game.

*NBA ratings are down 25% pic.twitter.com/fHFafefejR

Several more angles of the alleged flop were provided by fans online.

Every angle of the viral James Harden/Ingles elbow to the throat video.

Look mom i made it pic.twitter.com/RItZB0KDZi

That‘s embarrassing if you‘re such a great player pic.twitter.com/5MEpIwGAta

He needs to be in GOT season finale with this acting pic.twitter.com/4HF4PS3Zb4