MLB Mystifies Baseball People Yet Again As J.D. Martinez Is Somehow Not Named An MVP Finalist 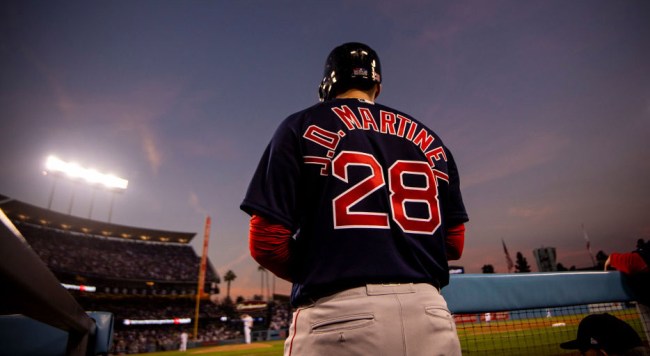 Sunday night, Major League Baseball announced its annual Gold Glove Award winners… during the Patriots vs. Packers game. That’s right. You may have missed it while watching Tom Brady and Aaron Rodgers, but MLB thought it would be the best time to announce one of their big annual awards because, well, they’re Major League Baseball.

Even a rookie in the league pointed out the idiocy of the timing, as St. Louis Cardinals pitcher Jack Flaherty took to Twitter to question MLB’s thinking.

“You know what’s great… is that they decided to do these awards during a Sunday night football game between Aaron Rodgers and Tom Brady,” wrote Flaherty. “I’m sure most of people are locked in to the awards.”

No way Major League Baseball could top that decision for stupidity this season, right? Of course they can!

On Monday, Major League Baseball somehow manage to make an even more inexplicable decision when they announced the finalists for American League MVP and they left Boston outfielder/designated hitter J.D. Martinez off the ballot.

Instead, the Baseball Writers’ Association of America announced they would be Mookie Betts, Jose Ramirez and Mike Trout. All solid players who had good years, but, hello?

Man why can’t we let the players get what they deserve in baseball? JD Martinez not in the final three of league MVP voting is a disgrace to the game!! As far as I’m concerned he deserves the award along with his teammate Mookie Betts! 330avg/130 rbis/111 runs/43 Hrs #W.S.Champs

If you created an award for a hitter who had most impact on a club's offense culture, J.D. Martinez would win in a landslide in 2018. Boston's collective take-what-the-pitcher-gives approach vs. Keuchel in ALCS should be shown to hitters, and J.D. was in the middle of that.

Harold Reynolds on J.D. Martinez not being a finalist for MVP: "It's flat ridiculous."

How is JD Martinez not a finalist for MVP? I don’t want to hear about not playing the field. He changed everything for Sox this season. He made Mookie better. Shame.

Hey @JDMartinez14, if you want to win MVP you clearly gotta step it up. A .500 average with 80 homers and 200 RBI has a shot at making you an AL MVP finalist next year. Good luck.

Ok so let me get this straight. JD Martinez was left off the ballot for the 3 finalists for AL MVP. Jose Ramirez made it over him

Does anyone else see the issue here? FIX THIS ISSUE

There was also another common theme to the reactions…

How about JD Martinez?. Im a yankees fan but he had an incredible season

#jdmartinez should not only be in the top 3 finalists for MVP but he should be the AL MVP! And this is coming from a Yankee fan! #mlb shame on you!

I'm a Yankee fan & am pissed JD Martinez is not in consideration for MVP. I get Mookie, but no way Sox win the Series w/o JD.

It’s ridiculous. I am a Yankee fan and over 50. So what if he is a DH! He was the difference maker and made a run at the triple crown. I don’t get it!

Im a #Yankees fan but to not put JD Martinez as a finalist for AL MVP is absolutely ridiculous!!! #RedSox

Im a Yankee fan but my vote for AL MVP is JD Martinez from the Red Sox hands down. Not being in the top 3 finalists is an absolute… https://t.co/E1OEKdEYY9