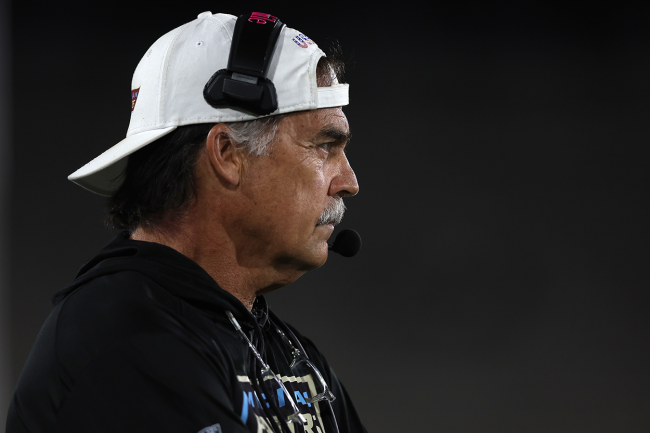 Jeff Fisher is, once again, catching heat for his end-of-game decision making. He made a questionable call in the closing moments of Friday’s USFL game between the Michigan Panthers and Philadelphia Stars that ultimately cost his team the win.

Down by one, trailing 25-26, the Panthers reached the three-yard-line with 28 seconds left in the game. Fisher had two timeouts at his disposal, but chose not to use them.

Instead, Michigan ran down the clock and sent out the field goal unit. With less than five seconds remaining, Michael Carrizosa lined up for a 21-yard, game-winning kick.

Carrizosa, however, is not a kicker. Well, he is, but he isn’t.

During his four-year career at San Jose State, Carrizosa was a punter. In fact, he is the Spartans’ all-time and single-season record holder in punting average.

He did not attempt a field goal in college, though. Entering Friday’s game, Carrizosa had not made a field goal in-game since he was a senior in high school— in 2013.

With the Panthers, he has been serving as both the punter and kicker.

Through the first three weeks of the season, Carrizosa had been 0-for-3 on field goal attempts and 0-for-2 on extra points. He finally made his first attempt of the USFL season earlier in the game on Friday.

Michael Carrizosa puts us on the board in Birmingham 🎯 pic.twitter.com/oCQpgxqTUh

Not long after that kick, after completely embarrassing himself in the season-opener, Shea Patterson led Michigan to within one point of Philadelphia.

SHIFTY SHEA IS BACK AT IT ⚡️🐾@SheaPatterson_1 with another big run pic.twitter.com/i9hFz6jHbn

Ultimately, Patterson and his teammates did what appeared to be enough to win. And then Fisher decided to kick.

On first-and-goal with three seconds left, Carrizosa lined up for the walk-off winner from 21 yards out. He had not instilled very much confidence at the position prior to the opportunity on Friday, but Fisher called upon him anyway.

As a result of the miss, Fisher, Patterson and the Panthers lost.

That ending was a rollercoaster of emotions 🤣🎢 pic.twitter.com/uhtJofH3VO

Michigan is now 1-3 on the season. Yikes.