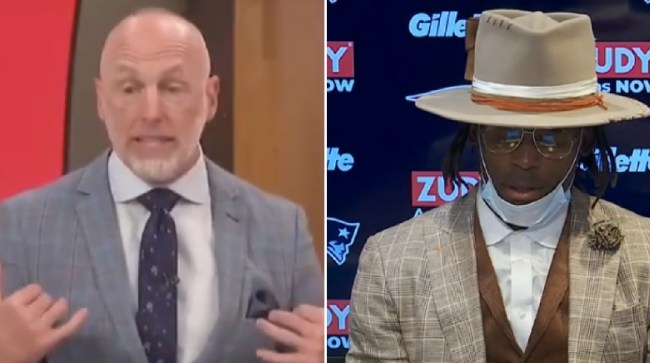 Former NFL QB turned TV analyst Jeff Garcia does not appear to be a fan of Cam Newton and his fancy outfits.

Newton, who is known for his for eye-catching fashion statements before and after games, was seen wearing an expensive suit on Sunday.

During the team’s blowout loss to the Niners, Newton was benched for Jarrett Stidham after an abysmal outing in which he threw three interceptions in the game.

Cam Newton has thrown 0 touchdowns and 5 interceptions in the last two games.

He has been benched for Jarrett Stidham. pic.twitter.com/yp41t5qsc9

After the game, Garcia took issue with the fact that Newton dresses up in fancy outfits for games despite his poor play.

Whew, Jeff Garcia been waiting a long time to get this off his chest about Cam Newton. pic.twitter.com/clx5IEGn9x

“You go into this game, two touchdowns and four interceptions (on the season). You throw, what, three more interceptions? You get yanked in the second half. There is nothing good going your way. Why are you dressing like that to bring more attention to yourself?”

“I’d be trying to ask the equipment managers: Put me in your jock sock cart and sneak me in the back door and I’ll show up on the field and do the best that I can.”

‘This just goes back to a couple years of just watching this guy and seeing him at the podium, but yet what he’s doing on the field does not translate to being that guy,”

“When you predict you’re going to win a Super Bowl and you go out and do it, wear whatever the hell you want,” / “But you know, right now I’m not buying it (with Cam Newton).”

Garcia drew the ire of the Internet over his comments about Newton.

Typical old school “acting like a quarterback” garbage. Cam is playing bad right now so he should change his clothes?

Not sure Jeff should be offering fashion advice tbh pic.twitter.com/QDgiGhJZOF

What the hell does Cam’s dress have to do with his play. Jeff Garcia you telling on yourself. By the way, you want to talk jockstraps, you can’t hold Cam’s. You never made the Super Bowl, let alone won the league MVP. GTHOH https://t.co/99nSFVGNle

You sound dumb @JeffGarciaJGFA how he dresses has nothing to do with his game and it’s really none of your business TBH https://t.co/V8XYIQHZQS

Many reasons to criticize Cam today. His choice of outfit is not one of them https://t.co/VuyyOhYNWb