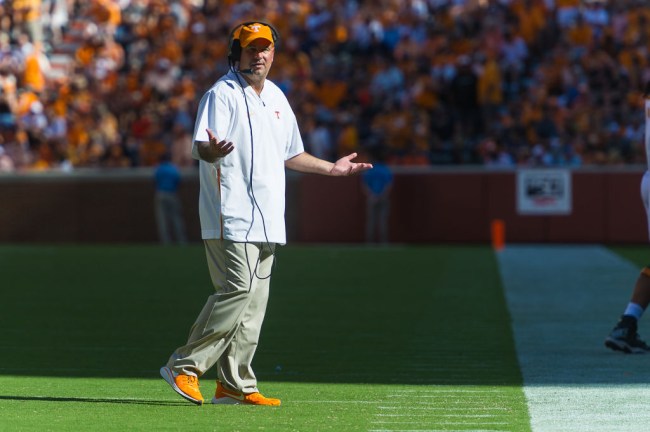 Tennessee travels to Alabama on Saturday for what is sure to be a blood-bath at the Vols’ expense, but head coach Jeremy Pruitt seems to be in a pretty good mood heading into the game.

Traveling to play the No. 1 team in the nation with a 2-4 football team is going to be the tallest of tasks for Pruitt and his staff, but he may be onto something with this gameplan of not giving ‘Bama the football.

“You know, I was thinking back there [in the office], there’s a high school team over in Arkansas,” Pruitt said. “They always onside kick, OK? They never punt. I don’t know. I’ve never seen ‘em play. I’ve always heard people talk about it, you know? In fact, I think they played one of the high school teams here in our state this year. Somebody was telling me about it.

“So, you know, we’ve really kind of considered that for our game plan — just don’t give ‘em the ball, you know? If we can do that, I don’t know.”

Pruitt is, of course, joking here, but he and the Vols have absolutely nothing to lose on Saturday so why not try a few onside kicks? There’s no chance they walk out of Bryant Denny Stadium with a win playing typical football, so you have to throw a wrinkle in there somewhere, so why not just onside kicks?

Then again, they have to score to even have the chance for an onside kick, so that could be a problem.

Pruitt’s reference of the Arkansas high school team is for real though. Pulaski Academy in Little Rock, Ark. almost never punts the football and only attempts onside kicks.

One thing is for sure, Pruitt wouldn’t lose any of the fans he still has on Rocky Top if he pulled out an onside kick or two on Saturday. His seat cooled off last weekend with a win over Mississippi State, but he’s still not the most loved man in Knoxville thanks to losses to Georgia State and BYU at the start of the year.

Tennessee and Alabama kick off at 9:00 PM EST on Saturday night.