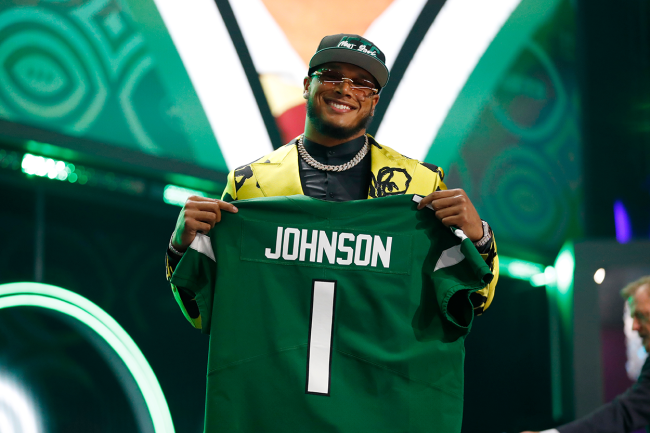 On Thursday night, Jermaine Johnson finally heard his name called with the No. 26 overall pick in the NFL Draft. Johnson, who was projected to potentially go in the top 10, was the biggest slip of the night (outside of Malik Willis) and waited longer than he expected.

However, after seemingly not being wanted all night, New York made a move to show him how much he is wanted. The Jets traded up and back into the first round for their third pick of the evening to take Johnson.

Johnson, a 6-foot-5, 262-pound edge rusher, is set to make an instant impact on a defense in need of any and all help. After starting his career with the Georgia Bulldogs, the Minnesota-native transferred to Florida State and had a massive final year on the collegiate level.

After the 2021 season, Johnson was named ACC Defensive Player of the year and was a first-team All-ACC selection. He recorded 70 total tackles on the year and led the conference with 18 tackles for loss and 12 sacks. Once Johnson gets to the next level, he is going to be a force to be reckoned with.

As the draft played out, there was a lot of confusion, anxiousness and uncertainty. Emotions were running high in Johnson’s camp and they reached their boiling point when Johnson was finally picked.

Although the majority of players drafted did not break down in tears, the same cannot be said about their friends and family.

When Jermaine Johnson was drafted by the Jets, his brother — who looked fly as hell — could not keep it together.

When your brother gets drafted by the jets #NFLDraft #TakeFlight pic.twitter.com/ZZqnkyQ5KJ

Of course, there is a joke to be made about the tears being over the team that selected his brother. However, the moment is pretty incredible and Johnson’s brother’s emotions makes it clear just how proud he is of the newest Jets edge rusher and it was touching.

If Johnson’s brother is any indication of what people think of him, New York got a really, really solid player and a great guy for whom his brother looks up to.