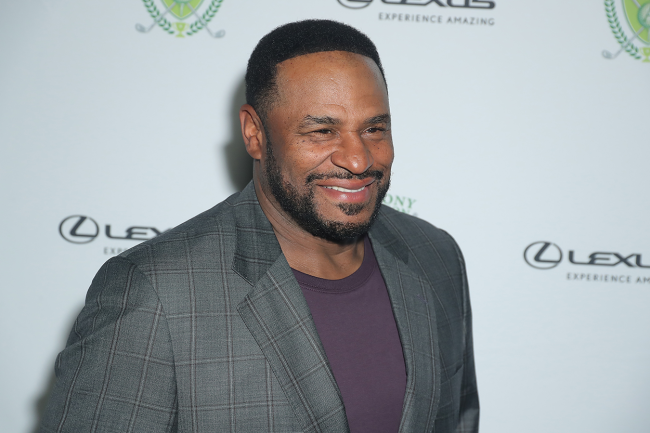 Jerome Bettis was inducted into the Pro Football Hall of Fame in 2015, but he is currently in the process of getting his degree. After an 11-year NFL career, six Pro Bowls and a Super Bowl, the 50-year-old is finishing up at Notre Dame after leaving the school nearly three decades ago.

Bettis, who was selected with the No. 10 overall pick in the 1993 NFL Draft, went pro after three years with the Irish. During his time in South Bend, he accumulated 37 touchdowns but did not walk the stage at graduation.

That is set to change this year and the man better known to some as ‘The Bus’ is apparently fitting right in with the normal college experience despite the fact that he is at least 25/30 years older than his classmates. A new profile from Pete Sampson of The Athletic details Bettis’ return to school and it’s both hilarious and super awesome how well he is meshing back into and embracing college life.

On the first day of class, the professor begins class with name tags and introductions. The name before Bettis was J.D. Bertrand, who led the Irish in tackles last season, and then they called on the 250-pound, 50-year-old running back. And then the teacher called upon the Super Bowl champion.

Since then, Jerome Bettis has engulfed himself in the experience after returning to Notre Dame to finish his degree.

Rather than taking classes online or not being a full participant, The Bus was an active member during group projects, he went to the school’s annual University Boxing Championships, and he even sat in the student section during a basketball game.

“If I was going to come back, I wanted to be 100 percent engulfed in the experience, I didn’t want to come back and try to be secluded, or hard to touch or reach or contact,” Bettis said to The Athletic. “My thing was, I’ll never do it again. So let me provide all of the access as much as I can. Because if I can pay it forward, and provide any kind of information that’s going to help, that’s what I want to do. This is a program I love.”

Obviously, as a multi-millionaire who owns multiple businesses, Bettis didn’t really need to cram for his business major classes. But that didn’t stop him from participating in study sessions or helping his group members put their best work forward. He was just worried about finding a group!

“How the hell am I gonna get in a group? I don’t know anybody,” Bettis said to The Athletic. “I’m like at the ballpark and saying, ‘Pick me, pick me.’ I was panicking internally.”

Also, the fact that Bettis has years professional experience doesn’t mean he doesn’t need to study up on his notes and pay attention in class.

“I’m dealing with equations and stuff. And I’m like, God, it’s been 35 years since I looked at an equation,” Bettis said to The Athletic. “I’m trying to find the P and I’m like, what? That’s been the challenge.”

In addition, Jerome Bettis has been hanging out with Notre Dame students and has fit right in.

During spring break, Bettis took his family to Cabo San Lucas for the week. On his way down, Bettis ran into another group of Notre Dame seniors who were headed to Mexico and one of them was his partner in a group project.

Said partner invited Bettis to play golf with him and his friends in Cabo and The Bus obliged. A 50-year-old, Super Bowl champion-winning senior in college played Chileno Bay with a dozen Notre Dame seniors who were more than half his age.

“Now we’re inviting Jerome to our graduation party,” said senior Maxwell Baumer to The Athletic. “It’s abnormally normal how he fits in with us Notre Dame seniors.”

Next month, Bettis will graduate alongside his friends from Mexico, his group project partners, and hundreds of other soon-to-be Notre Dame alumni. He will walk across the stage, receive his diploma and move his tassel.

Despite the fact that he is not like the rest of his class, Bettis wanted to finish out the full college experience and that’s exactly what he did. What a legend.