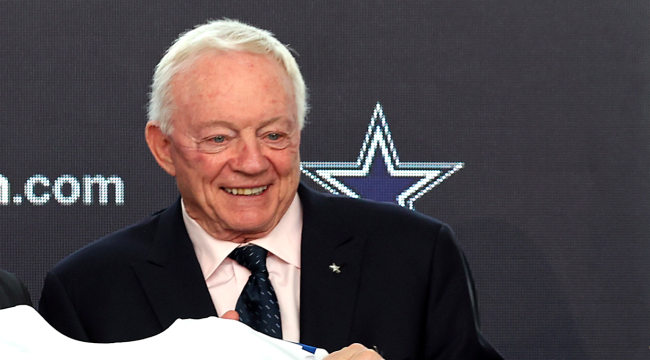 Dallas Cowboys owner Jerry Jones, in trying to prove he knows what he is doing, almost showed the media his team’s draft strategy sheet to the media, but was stopped by his son, the team’s CEO Stephen Jones.

The reason Jerry wanted to show the media what the team’s plans are was because some questioned whether the Cowboys’ first pick Tyler Smith was really their top choice.

“Let me put it like this,” Jerry said at Friday morning’s media session. “We have both of them [referring to other players], printed three days ago, below [Tyler Smith]. Both of those players are below him.”

Then, just to be perfectly clear, Jerry held out the Cowboys’ draft strategy sheet so the reporters could get a better look at it.

“Can you see that?” Jerry asked.

“Don’t show ’em that,” Stephen said, grabbing his dad’s arm and pulling it back.

Then, just in case anyone was wondering, Jerry confirmed that he was “dead serious” about having the two other players rated below Tyler Smith on the draft sheet.

“Put that sheet down!” Stephen then chided his dad again with a laugh.

Jerry then tried to defend his faux pas by taking a look at the sheet and telling the media, “Let’s see who’s on here. I’m trying to see who’s on here. There wouldn’t be but, uh… If you take out the quarterbacks there won’t be anybody on here.”

Dallas Cowboys fans were not exactly thrilled at Jerry Jones’ cavalier attitude about sharing the team’s draft scouting reports. The rest of the NFL, however, loved it.

Being a Cowboys fan is embarrassing

A foursome of morrons, its strange to understand why no superbowl in a lot of years, hell no NFC championship game appearance since .... I mean this is management.

Someone want to dub this with the "Curb Your Enthusiasm" music?