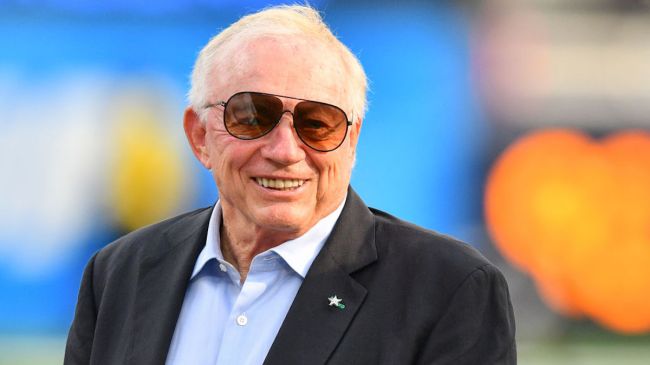 It certainly hasn’t taken long for the Dallas Cowboys’ 2022 season to veer off the rails, as the team was not only embarrassed by the Tampa Bay Buccaneers in their home opener but starting quarterback Dak Prescott was knocked out with a thumb injury that will see him sidelined for 6-8 weeks.

Following the news of Dak’s injury, both Cowboys fans and NFL fans, in general, took to Twitter to crush Jerry Jones’ skills as a general manager, as many believe the Cowboys failed to upgrade the team’s wide receivers and offensive line during the season.

Dak Prescott is getting destroyed.

He can thank Jerry Jones and Stephen Jones for their brilliant team-building and support.

Jerry Jones still being the Owner, President and General Mangager is what’s wrong with Dallas! Don’t mind me tho and Carry on…

Jerry jones what the fuck did you expect??? Traded away coop and then proceeded to get Dak no help at all. Now Dak is hurt because u didn’t get oline help or receiving help. Fuck you https://t.co/JmBZYrhmis

The most maddening thing is that Jerry Jones’ “sense of urgency” after the playoff loss to San Francisco turned into a wasteful offseason of not improving the roster, but instead keeping the status quo of in-house personnel.

To make matters worse for Jerry and the Cowboys, they were the only NFC East to not win on Sunday — as they lost to the Bucs by a score of 19-3 — meaning they’re already in sole possession of last place in the division despite being just one week into the season.

With Prescott out until about November, the Dallas Cowboys will be turning to backup signal caller Cooper Rush, who has yet to start an NFL game during his six-year professional career. It certainly doesn’t get any easier for the Cowboys next week as they follow up their game against Tom Brady and the Bucs with a match-up against Joe Burrow and the defending AFC Champion Cincinnati Bengals.