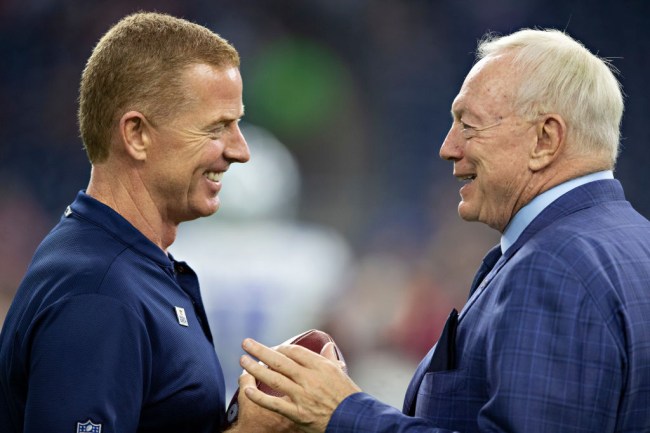 For a man who has consistently undermined his head coach, whether inadvertently or on purpose, Jerry Jones seems to always sprinkle in a little loyalty.

Just days after former Cowboys head coach Jimmy Johnson ripped Jason Garrett for spending a night of his bye week at Game 3 of the World Series, claiming it “send the wrong message,” Cowboys owner Jerry Jones comes out to play the role of “fun boss.”

Jones said Tuesday on 105.3 The Fan in Dallas, according to ESPN:

“I’m not associated with anybody that works any harder than Jason Garrett. I can assure that he did have his mind on our team. … I know where Jason Garrett’s mind is and I know where his work ethic is. A little bit of a respite now and then as far as the bye week is not an issue.”

“No one recognizes more the visibility and, if you will, interest in what we are doing when we aren’t playing football on that particular weekend and so everyone takes that into account,” Jones said. “But as far as, again, going back to Jason. I just chuckle when I think about there might be some criticism as to where his mind is and his work ethic.”

The 3-4 Cowboys play the 3-4 Titans at home on Monday Night Football next week, so we’ll see how forgiving Jerry Jones is if his team lays an egg on national television.