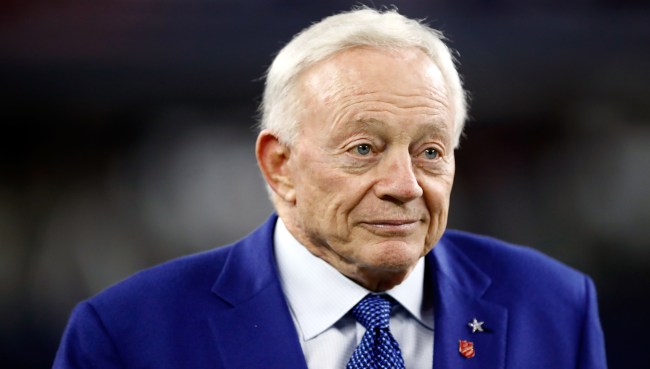 Dallas Cowboys owner Jerry Jones is now 76-years-old and the older he gets, the more he seems to just not GAF if the words coming out of his mouth make any sense, and I have to respect that.

From his horrifying analogy to describe the Cowboys’ contract negotiations to claiming that his lame duck head coach Jason Garrett is in “high demand” around the NFL, Jones is one of the most entertaining team owners in sports.

On Wednesday, as he was making a victory lap on television, talking about the Cowboys finally coming to terms with running back Ezekiel Elliott (and a 16% jump in the stock price of his company Comstock Resources after closing a $2.2 billion purchase of one of the company’s rivals), Jones made a completely absurd statement about how much he believes legalized sports betting will have on NFL TV ratings.

During an interview with Daniel Roberts and Kristin Myers of Yahoo Finance Wednesday morning, Jones was asked, “What do you make of the future outlook for legal sports betting and the NFL? Where do you stand?”

“Well, first of all, betting and wagering has been an integral part of the NFL for a long time just through individuals in various forms making their wagers, my town against your town. So it’s always been a part of it, it manifests in various ways, but it’s always to the benefit of the viewership,” Jones replied. “The viewership is where our numbers will increase, the viewership is where people will stay longer. And that value then is how our sport will benefit from gaming.

“I know this, from the standpoint of fantasy football, it’s an integral part of the interest we have in the NFL. So gaming is going to make a big difference. I dare say that gaming will increase the value of television, of presenting our games, I dare say it will go up 50 percent because of the gaming concentration.”

Considering the fact that Super Bowl LIII between the New England Patriots and the Los Angeles Rams had the lowest average viewership since 2009, that is a rather bold statement.

Highlight: "One thing about the NFL: politics are not good for us in any way,” @dallascowboys owner Jerry Jones says. "We’ve got to stay away from politics when the social gets over into politics." Full interview: pic.twitter.com/DzkvmiagN2

Does Jones think that the fact betting on the NFL is now legal in many new places will, in turn, mean 50% more people will now be gambling on the NFL? Because if that’s what he’s thinking, he’s going to be in a for a rude awakening.

All it means is that everyone who was already betting on the NFL will now be able to do it locally and legally. There isn’t going to be a sudden rush of new people deciding to wager on the NFL. Surely he knows this though, right?

And I wasn’t kidding about Jones taking a victory lap on TV. Not only was he on Yahoo! Finance, he also appeared on CNBC, Bloomberg, Cheddar, and The Street.