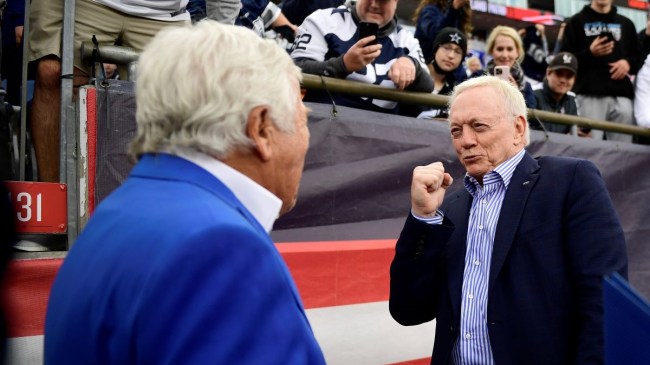 While I, personally, would not mind seeing two egregiously wealthy billionaires fight to the death, it appears that option is off the table.

Dallas Cowboys owner Jerry Jones and New England Patriots owner Robert Kraft made headlines earlier this week when they got into a heated argument over the contract of NFL commissioner Roger Goodell.

Jones reportedly got so angry at his fellow team owner that he at won’t point told Kraft “don’t f— with me” during the negotiations.

For the second time in five years, Jones is leading a charge against the way Roger Goodell is compensated.

“Kraft is not as concerned about (Goodell’s contract as Jones),” Van Natta said, as transcribed by Audacy. “Kraft wasn’t as concerned about it back in 2017, nor was (Falcons owner) Arthur Blank, who was the chairman of the compensation committee, and so they got into it. And as I understand it, Kraft was sort of saying like ‘Again? We’re dealing with this again?’ And Jerry said to him ‘Don’t (expletive) with me,’ and Kraft said ‘Excuse me?’ And then Jerry ended it himself, I guess turned it into a PG rating and sort of said don?t mess with me.

“I know that Kraft and Jerry are — not only are they the two most powerful owners in the NFL, I think there is some rivalry there. Jerry beat Kraft to the Hall of Fame, that hurt Kraft. Believe me, that hurt Kraft. Jerry won that. And there is a lot of rivalry there, guys. So is it possible that don?t mess with me, don’t (expletive) with me, there’s some stuff between those guys? Yeah. But the way Jerry is viewing Goodell, I was told last night by people close to Jerry, it’s not personal. They insist it is about the contract and the structure of the new contract.” – via The Spun

So it certainly appears it’s all water on the bridge now. Which is shame, because I would’ve enjoy Jones and Kraft on the undercard of the next Jake Paul boxing card.