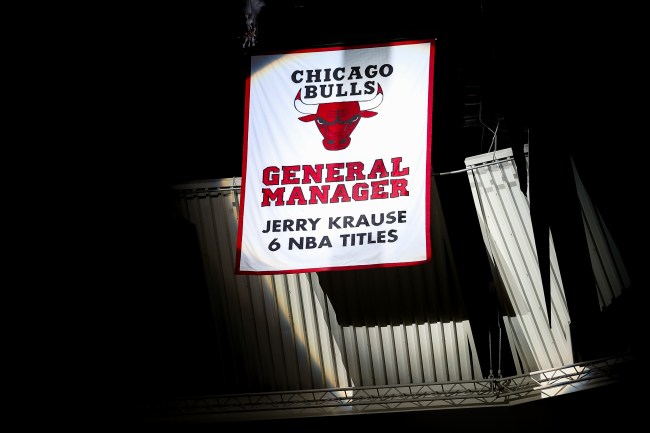 It’s been over a month now without proper sports and the void seems to grow larger by the day, especially as the either continues to warm. Just picturing housing hot dogs and IPAs at the bar as the Mets routinely break my heart under the summer sunlight is giving me a quarter-chub.

Thankfully, though, while traditional real live action may escape us, we have been able to get our sports fix once a week thanks to ESPN’s epic Michael Jordan docuseries The Last Dance.

The magic of the documentary thus far is that it’s been equally captivating for both those who had the pleasure of watching him in the 80s and 90s and those were too young to take in the GOAT’s reign.

One of the documentary’s main topic thus far has been the internal strife that existed within the organization, particularly between general manager Jerry Krause and team stars Michael Jordan and Scottie Pippen.

Krause, unfortunately, passed away in 2017 at the age off 77-years-old, so the former Chicago Bulls general manager hasn’t been able to explain his side of the story on ESPN’s The Last Dance. However, the late Bulls GM was writing a memoir prior to his death that does provide further insight into his point of view.

Krause was working on a memoir when he died that explores a lot of these issues. K.C. Johnson of NBC Sports Chicago was given excerpts of Krause’s memoir by the Krause family, and on Monday he published one that details Krause’s fraught relationship with Jordan — one that was driven by both men’s intense desire to win at all costs.

“To his everlasting credit, at the end of his time with the Bulls he could have really screwed the franchise big time and he didn’t,” Krause wrote.

“In the summer after winning the last championship he’d cut his index finger of his shooting hand very badly with a cigar cutter. It was seriously questionable if he could regain enough movement in the finger to be himself again as a shooter. He could have easily put us in an extremely tough situation by saying he wanted to play and force us to sign him to the biggest contract in team sports history. It would then have been easy to go on the disabled list with the finger injury and spend the rest of that strike-shortened season picking up checks every two weeks and not playing at all. But Michael being Michael, once he signed a contract, he gave you a thousand percent effort and would not think of stiffing you.” [via Uproxx]

Despite the obvious friction between the team’s architect and the franchise’s centerpiece, Krause and Jordan worked together for 13 years fro 1985 to 1998, delivering six titles during that time.