Jerry Rice Showed Off His New GOAT Tattoo, Proceeded To Get Trolled Into Oblivion By The Internet 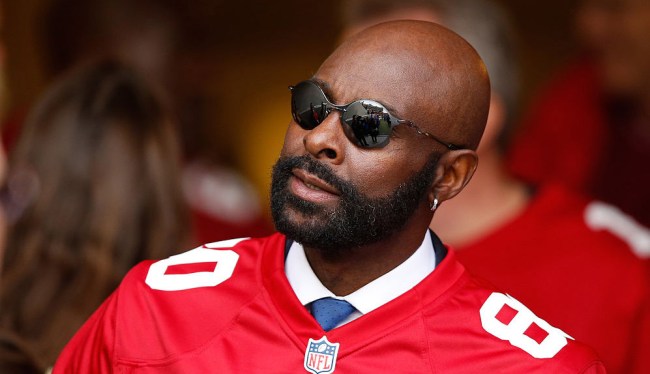 Hall of Famer Jerry Rice recently took to Twitter to show off a new GOAT tattoo he got on his arm as part of a sleeve he’s working to complete.

Considering the fact that he is the NFL’s all-time leader in almost every major statistical category for wide receivers, getting a GOAT tattoo seems pretty appropriate. After all, he was selected to the Pro Bowl 13 times, won three Super Bowls, and as of 2017, held over 100 different NFL records. Achievements like that certainly warrant GOAT consideration.

Another addition to the sleeve #WorkinProgress pic.twitter.com/GVBPF0o1YK

Heck, bro is 55-years-old and and still thinks he could play in the NFL, 13 years after his retirement, telling ESPN Magazine, “I still feel like today, if I wanted to come back to football and play football, I could do it, at the age of 55. I’m one of those guys that I still believe that if I wanted to, I could come back, catch over 80 balls and really be productive on the field. …I think I’m still explosive, and I think I still can beat up on some defenses.”

Just kidding! A bunch of people on the internet trolled him with one joke after another. That’s what they do.

Why is Tom Brady on your arm?

Why’d you get a Lebron tattoo

Why does Jerry Rice have a Calvin Johnson tattoo? https://t.co/QZmx46Ilv6

Why did Jerry Rice get a Trubisky tattoo? That’s kinda funny https://t.co/YEDLBxrAun

Jerry Rice really got a tattoo of Brian Scalabrine https://t.co/pCYyd8KgFz

Get a chicken next. pic.twitter.com/Vv2nW0q8To