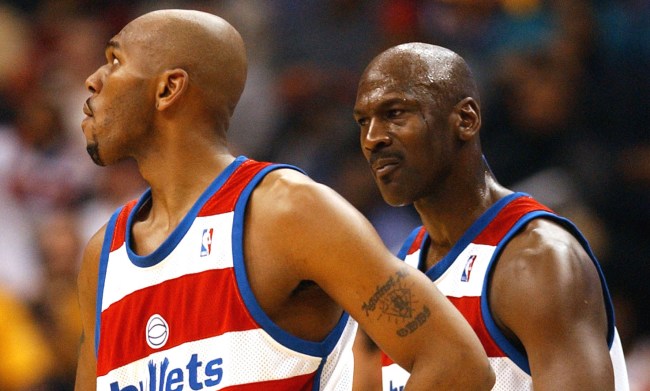 Jerry Stackhouse had a fine NBA career, finishing his 18 years in the league with a 16.9 points per game average, racking up a couple All-Star Game invites and playing in an NBA Finals with the Dallas Mavericks during the 2005-06 season. While impressive, Stackhouse is far from being considered one of the best players of his generation — even if he could fill it up during his prime.

During those peak years, Jerry Stackhouse found himself on a Washington Wizards team with the GOAT himself, Michael Jordan — who came out of retirement to lace ’em up for two seasons. To almost any other NBA player, this would be epic, and would lead to one understanding: It’s Michael’s team, so get him the ball and everybody get the fuck out of the way. In fact, that was exactly a phrase the team’s head coach at the time, Doug Colins, once said while he and a younger MJ were together with the Chicago Bulls during the 1989 season.

As it turns out, Collins’ coaching philosophy hadn’t changed much when he was coaching Jordan and Jerry Stackhouse on the Wizards — and the latter is still steaming over it.

While talking to ESPN’s Adrian Wojnarowski on The Woj Pod, Stackhouse absolutely dogged the decision to ever play alongside Jordan, saying he even lost the “reverence” he had for the six-time champ because everything was being designed for him. Take a listen and look below.

“Honestly, I wish I never played in Washington and for a number of reasons. … Things were still being run through Michael Jordan. [Head coach] Doug Collins, I love Doug, but I think that was an opportunity for him to make up for some ill moments that they may have had back in Chicago. So, pretty much everything that Michael wanted to do [we did]. We got off to a pretty good start and he didn’t like the way the offense was running because it was running a little bit more through me. He wanted to get a little more isolations for him on the post, of course, so we had more isolations for him on the post. And it just kind of spiraled in a way that I didn’t enjoy that season at all. The kind of picture I had in my mind of Michael Jordan and the reverence I had for him, I lost a little bit of it during the course of that year.”

Looks like we’ve got North Carolina Tar Heel on North Carolina Tar Heel crime, guys, because Jerry Stackhouse is pretty pissed off about having to play with the legend of MJ. And, sure, Stack has a point — after all, he was in the prime of his career at 28 and 29 years old during his two years in D.C., whereas Jordan was a full 10 years older — but, c’mon, fans weren’t coming to the arena to watch Stackhouse and the ‘zards play, they were coming to see the GOAT take a bunch of shots and try to get his.

Fair or not, that’s what happened during Jordan and Stackhouse’s time together as teammates, and I’d be damned to think anyone but Jerry Stackhouse would want it any other way. Sorry, dude, all hail to His Airness.