Mariners Fan Goes Viral For Buying Jesse Winker A Pizza After He Started A Benches-Clearing Brawl Vs. The Angels 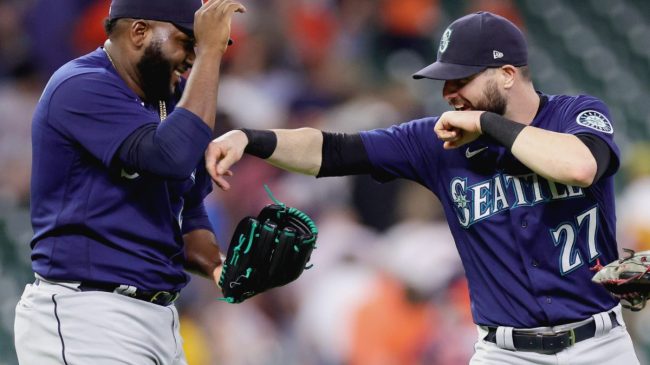 Jesse Winker made headlines Sunday afternoon in the Mariners’ matchup against the Angels. After being plunked by a pitch in the second inning of action, Winker started a benches-clearing brawl.

Winker was ejected and not allowed to return to the field. He flipped off the Angels crowd as he left the diamond for good measure.

After the game, one Mariners fan rewarded the outfielder for his early exit by ordering him a pizza. The fan is now going viral on social media. You can check out the whole thread here.

I just ordered a pizza for Jesse Winker from @MountainMikes Pizza in Anaheim. You deserve it big guy @Mariners pic.twitter.com/AymUQvQ3r9

Sofie, a Seattle supporter, thought Winker deserved the slice after the game. She placed an order for a pepperoni pie at Mountain Mike’s pizza in Anaheim.

That pizza was then delivered to Angel Stadium. She even offered to double the delivery driver’s tip to ensure that it got to the clubhouse safely.

The story wasn’t quite through yet.

The pizza was successfully delivered to the stadium, and it passed the taste test according to Winker.

I have confirmed that not only did Jesse Winker get the pizza, he said it was really good. So, there you go, @MountainMikes is on my list next time I'm in Anaheim. Thanks for the tip @sofieballgame https://t.co/Ek7Kc820Cr

But he wasn’t the only winner on the evening.

The Mariners decided to give a bit of payback for the generous fan, gifting her with a jersey from the team store.

Mariners fans are the best 💙@sofieballgame, we have a Jesse Winker jersey from the @MarinersStore we’d love to *deliver* to you. What do you say? pic.twitter.com/w6odOwCdn9

A crazy ending to an even crazier scene on the baseball diamond. Everyone left a winner after this wild Sunday afternoon matchup, except for the Mariners who fell 2-1.