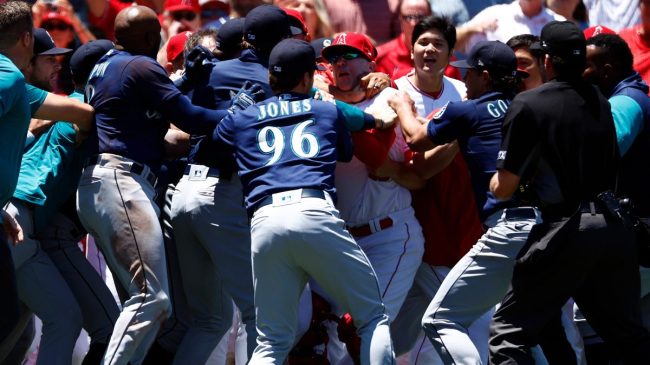 A massive brawl broke out on Sunday in a matchup between the Los Angeles Angels and Seattle Mariners. The melee caused both benches to clear with players on each side throwing punches.

It was a result of Mariners outfielder Jesse Winker being hit by a pitch in the second inning of action. The lefty didn’t take too kindly to the pitch, and he had a bit to say before heading down the first base line.

In fact, Winker never actually took that walk to first as shouting from the Angels sparked a reaction. The outfielder flew off the rails after something was said, making a beeline for the third base dugout.

Then all hell broke loose.

Both benches cleared in what was an actual brawl. None of that standing around and waiting for something to happen. Punches were thrown, ejections were handed down, and birds were flipped.

Jesse Winker was hit by a pitch and a never-ending BRAWL broke out between the Mariners and the Angels pic.twitter.com/1MgFd55vhn

This brawl lasted for some time with players from both the Angels and Mariners escalating the situation. Even Anthony Rendon, who’s sporting a cast on his right arm, got into the action. He and Winker went head-to-head with Rendon throwing a left hand to the face of the Mariners’ outfielder.

When things were all said and done, six players were tossed along with both managers. Winker showed his dismay to the home crowd, flipping off the Angel fans as he left the diamond.

It will be interesting to see how this plays out as far as suspensions go. Both sides will likely see some repercussions from this absolute melee.