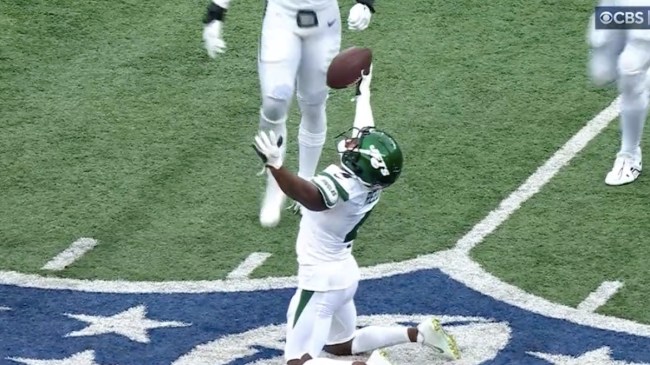 The New York Jets kicked off their 2022 season on Sunday against the Baltimore Ravens, and perhaps unsurprisingly, the increasingly pitiful franchise looked as pathetic as they have for the previous decade, ultimately losing the game by a score of 24-9.

There was, however, one bright spot for the Jets: DJ Reed’s interception late in the fourth quarter. Despite the fact that the pick had no impact on the result of the game, the moment was one of those “bigger than a game” instances, as Reed revealed in a postgame interview that his celebration was in memory of his father, who recently passed away.

“My Dad passed away literally right before this game,” the 25-year-old Reed explained to CBS reporter Otis Livingston, “I was emotional, still emotional… so, that pick was for my Dad. It wasn’t celebrating or about the scoreboard, it was much deeper than football.”

You never know what someone is going through

Some criticized Jets DB DJ Reed for celebrating a late INT in a blowout@OlivingstonTV discussed the moment with Reedpic.twitter.com/PcnS7dJxhg

Reed, who is in his first year with the New York Jets, signed a three-year, $33 million deal with the team during the offseason following a few years in San Francisco and Seattle.

Despite the feel-good moment for Reed, that was about the only positive that the Jets and their fanbase were able to take away from their Week 1 game as it’s looking like the franchise will be suffering through yet another subpar season.

The Jets will look to get their first win of the 2022 season next week when they travel to Cleveland to take on the Browns in their home opener.