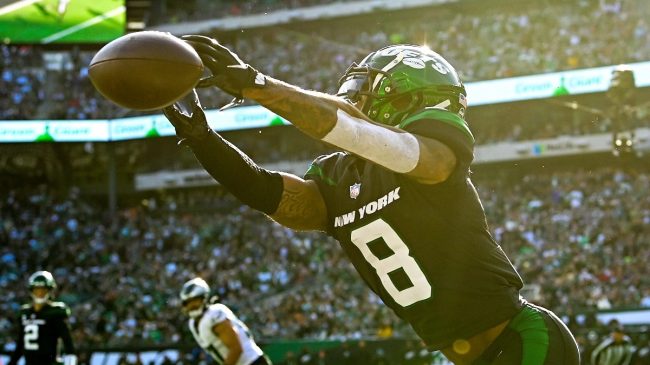 Many have been critical of Elijah Moore lately after rumors swirled around him submitting a trade request from the New York Jets. It’s an odd choice on his part, considering he hasn’t quite done anything to warrant a request like that. Even so, his latest post has him in hot water again, as the fanbase just isn’t seeing eye-to-eye with him.

On Tuesday, the young Jets wide receiver hit social media showing a passage about “facing persecution.” Additionally, Elijah Moore leaves a simple “Thank you,” as his caption. It’s unclear exactly what he could mean by this cryptic post. However, it is clearly rubbing fans the wrong way.

It seems as though Moore believes he’s facing persecution himself even though he brought all of this attention to himself, to begin with. From the rumored trade request from the Jets to the alleged exposed burner account, things are getting a bit rocky for the second-year wide receiver. As you can see, the fanbase just isn’t buying this post.

I try to defend our players as much as I logically can but I can’t rock with EM here. There should never be a reference to God in regards to a football player not getting the ball enough then causing self inflicted friction/stress by voluntarily requesting a trade.

Jets fans are making a lot of sense as they call out Elijah Moore.

This passage is not for you Elijah.

I hope you bounce back, I’m rooting for you, but you are making it difficult and it is your fault.

Okay, but this is a great use of that meme.

We’ll see how this unravels. In the meantime, the Jets are 5-2 and have been surprisingly great this season. Breece Hall and Alijah Vera-Tucker’s injuries surely hurt the offense. Even so, New York will hope for Moore to step up and help the team, even though all signs are pointing to a potential divorce.