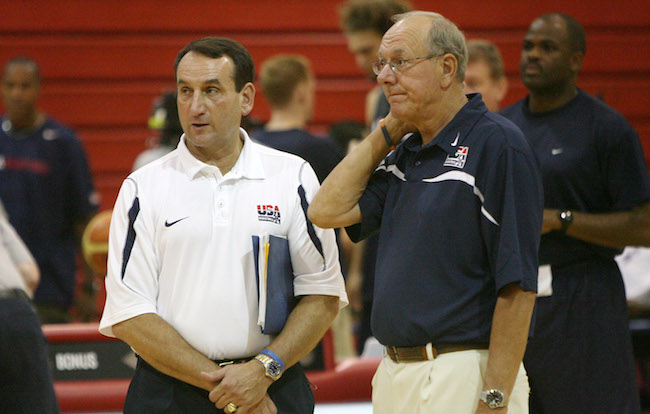 Mike Krzyzewski and Jim Boeheim are two of the best (and longest tenured) coaches in college basketball. The Syracuse legend has been coaching the squad since 1976, and since Krzyzewski took the helm at Duke in 1980, the two each managed to earn a spot amongst the top 10 winningest coaches in the history of NCAA men’s basketball. Krzyzewski might have a 173 win lead over Boeheim, but the head of the Orange claims he’d reign supreme if the two men ever met on the court.

Boeheim recently appeared on The Dan Patrick Show ahead of Syracuse’s game against Duke in the Sweet Sixteen on Friday, and Patrick asked him how he thinks he’d fair if the 73-year-old (who was a walk-on at Syracuse in the 1960s) took on the man he’s coached Team USA with for the past three Summer Olympics.

According to Boeheim, it would be a bloodbath:

No contest. Easy win for me. Easy win. He was a defensive player at (Army). Coach (Bob) Knight wouldn’t even let him shoot a foul. He actually was a good shooter in college, but Coach Knight didn’t let him shoot too much. He made him pass to the other guard. … I think I could still handle him in a shooting contest.”

Patrick was later joined by Mike Krzyzewski, who agreed with his fellow coach’s assessment of his game:

I’m OK with him being a better shooter. He’s a better poker player too. He’s pretty damn good, and the two of us together were a really good team for (the) U.S. Those were days that both the two of us will cherish.”

I doubt we’ll ever see a matchup between two coaches in their 70s with names that would eliminate even the smartest home-schooled kid in a spelling bee, but there’s nothing I’d like to see more.