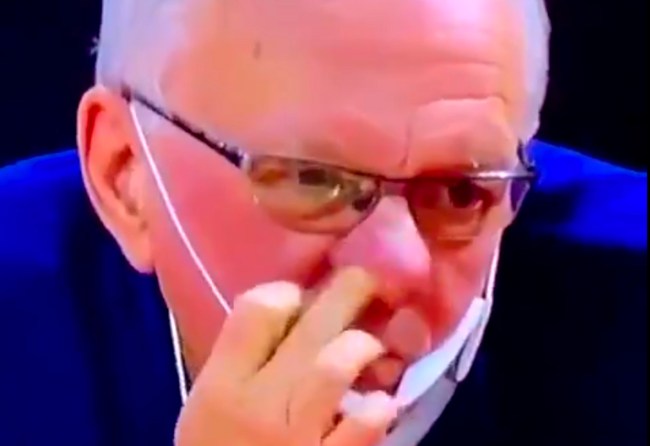 Humans are gross, especially behind closed doors, but every person should go above and beyond to not be gross in public.

Not just for the benefit of others but because cameras are always watching, especially at a live sporting event.

On Tuesday, Syracuse faced off against NC State Wolfpack. Syracuse head coach Jim Boeheim must have lost himself in the action and didn’t realize he was coaching a televised basketball game and not sitting in his favorite recliner while his wife tested out new Yankee Candles.

Boeheim dug deep into his nostril and pulled out a mid-game snack.

Syracuse won the game 77-68 but the real winners were the loud and proud booger eaters around the world.

Did no one notify Boeheim that we’re in the middle of a damn pandemic and eating his booger might cost him his life? Well, not so much eating the booger, but putting his finger in his mouth. Who knows where that finger has been on the sideline? Besides jammed up his nasal cavity.

Is it just me, shouldn’t an athlete or coach ASSUME cameras are on them AT ALL TIMES, just to be on the safe side? That feels like a good general rule to follow.

Of course, Jim Boeheim is 76 years old, long past the age of giving a crap about the opinions of other people. He probably has strong opinions on which flavor Gatorade goes best with dried mucus.