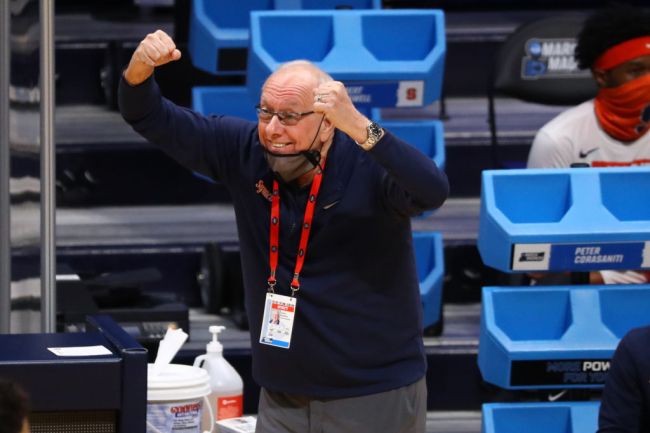 Seven days ago, Syracuse basketball sat firmly on the bubble. The 11-seed Orange squeaked into the field of 64 over teams that many people deserved the final spots and dominated 6-seed San Diego State in the First Round. Now, a week later, they’re headed to the Sweet Sixteen after another upset victory over 3-seed West Virginia. This marks head coach Jim Boeheim’s 20th (!!) Sweet Sixteen appearance as the head coach in northern New York, moving him into elite company alongside Duke head coach Mike Krzyzewski (25) and former North Carolina skipper Dean Smith (21).

"You get in this tournament and you just try to play it one play at a time." @Cuse_MBB HC Jim Boeheim talks about taking another double-digit seeded team to the Sweet 16. pic.twitter.com/ndKHnLahB8

Boeheim is from New York, played for the Orange from 1963-1966, was an assistant with the team from 1969-1975 and took over the program in 1976. In his 45 years as head coach, he has never had a losing season, played in March Madness more than 75 percent of the time, and has reached at least the Sweet Sixteen in nearly half of his career. Boeheim has won a Tournament game in six different decades, but this year might mean just a little bit more. All that the 76-year-old knows is Syracuse basketball, and now his son Buddy gets to join him on the journey.

The coach’s son was the Orange’s leading scorer on Sunday and put on a show with his range. Buddy Buckets had just one made field goal in the first half and went to the locker room with only three points. Whatever his father said at halftime lit a spark in the junior guard and Buddy went 7-of-11 in the final 20 minutes.

The @Cuse_MBB star dropped 5 threes in the second half! 🔥🔥 pic.twitter.com/pronLXWsF5

The outrageous shooting performance was not limited just to Buddy, and the Orange shot 51.9 percent in the game. Syracuse advances to play either Rutgers or Houston in the milestone March Madness contest for Boeheim. The team’s last Elite Eight showing came prior to Buddy’s arrival in 2016, so he will look to break the streak and continue a run to the school’s first Final Four since that same year.