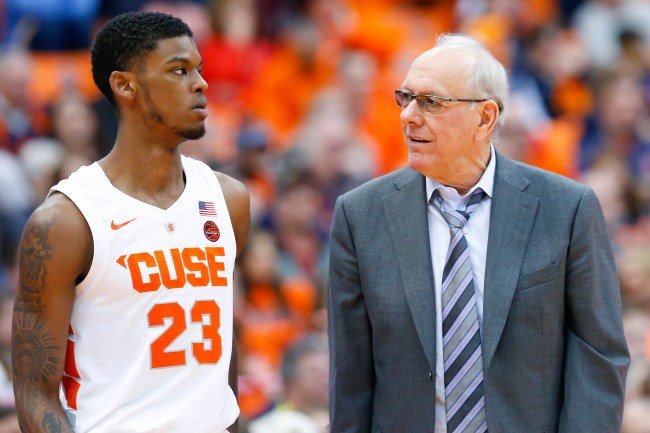 Syracuse men’s basketball head coach Jim Boeheim struck and killed a pedestrian walking on Highway I-690 just before midnight last night, mere hours after the game between the Syracuse Orange and Louisville at the Carrier Dome which ended at 9pm.

Police tested Jim Boeheim’s blood for alcohol which came back with a 0.00% BAC. It’s reported that he was interviewed by police and released with no charges expected to be filed. Syracuse.com reports that driving conditions throughout the area were ‘icy’ but it’s unclear if that played a role in the pedestrian’s death.

Vehicle was in middle of the road. There will be no charges. @NunesMagician

I don’t even know what to say here other than this is a completely fucking awful situation. I knew a guy in H.S. who was in a car pulled over on the highway and one of the passengers got out and was struck and died on the spot. That guy I knew was changed forever in an instant. Being a witness to death like that changes you forever. I also had a friend who was driving to school one morning when a homeless person jumped out in front of his car and died. The police later said the person was trying to commit suicide. That forever changed my friend and sent him down a path of extreme religiousness. To this day he goes on annual mission trips and is probably the most religious person I know.

The Syracuse Orange beat #18-ranked Louisville last night. They sit 4th in the ACC right now (9-4) with an 18-8 overall record. I can’t imagine there was anything further from Jim Boeheim’s mind last night on his drive home than killing a pedestrian with his car.

Likewise, I doubt the family of that victim expected a call from the police last night telling them the tragic news. This is just a truly awful situation all around. My condolences to all parties involved.