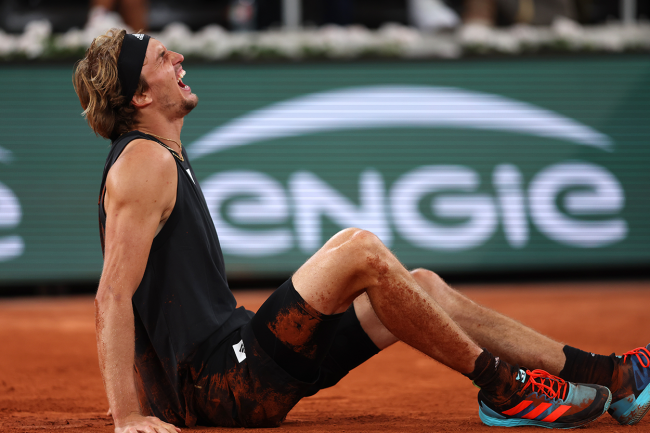 Friday’s French Open semifinal match between Rafael Nadal and Alexander Zverev was shaping up to be an all-time great. The two were absolutely battling before the match came to an unfortunate end.

In a back-and-forth first set, both guys were hitting some incredible shots. Nadal, who went down 6-4 in the tiebreak fought back to take the first set 7-6.

In the second set, tied 6-6, it was more of the same. Both Nadal and Zverev were playing their hearts out in a very long match that was well over the three-hour mark with at least one set to go.

Unfortunately, right before the match reached its second tiebreak, Zverev went down with a painful ankle injury that sent him to the clay, writhing in pain. He could not walk and had to be taken off of the court in a wheelchair.

It did not look good at all and his screams were deafening as he rolled around on the court.

Alexander Zverev just badly injured himself after a slide. In tears, the German must give up after a solid match. Shocking images. Extract from the French channel France 2. Nadal is shocked. #RolandGarros #Nadal pic.twitter.com/dpK6Mnbvrv

After a short time, Zverev returned to the court on crutches to shake his opponent’s hand and thank the crowd for their support. He had withdrawn from the French Open.

It was devastating, especially after such an incredible start to the match.

But it led to an incredible showing of sportsmanship between two top competitors.

It also led to a hilarious hot mic moment in the broadcast booth. After Zverev exited the court, the Tennis Channel went to commercial break.

When the broadcast came back, Jim Courier was unaware that they were live and he got caught muttering “God dammit” into his microphone.

Courier, whether he knew it or not, immediately went viral for what he said without knowing he was on air. His emotion, however, perfectly summed up the entire moment. It was a shame to see Zverev go down in the way that he did.