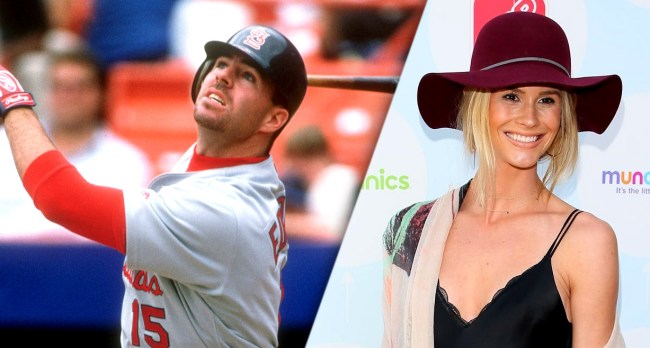 Last Friday, one day after the couple’s fifth wedding anniversary, Jim filed for divorce after Meghan reportedly accused him of “having an affair” with the nanny.

Back in June, Edmonds admitted sending very “inappropriate” messages to someone who was not his wife, calling it a “lapse in judgment.”

Three days ago, Meghan made it pretty clear in the comments section of one of her Instagram posts that she believes Jim cheated on her with the nanny.

“Judging by Jim’s Instagram, I’m guessing it’s nanny Carly whom he posted NINE photos of 11 months ago. And she has deleted her IG. 🤔,” someone wrote in the comments to which Meghan replied with a “thumbs up ” emoji. 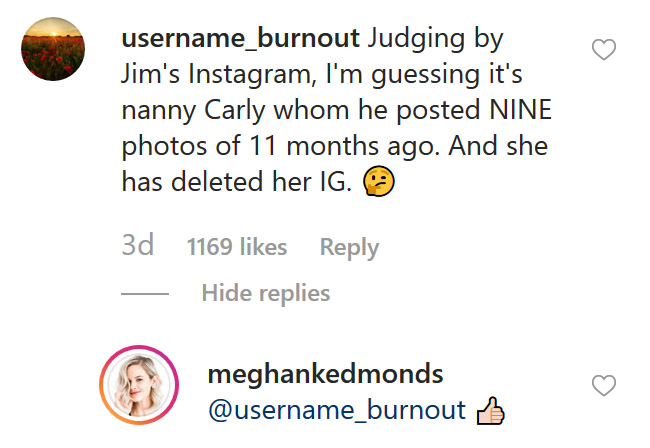 I’m not sure Jim Edmonds understands what breaking news is pic.twitter.com/1VNu7i7sJD

** BREAKING NEWS ** It’s one thing to be accused of something. It’s another thing to be so negligent and so careless and ruin the lives of innocent young people.. I did not sleep with our nanny. She’s not just a nanny, she is someone that we brought into our house and promised to protect and look after while she was in our home.

We have been treating and raising this young girl like she is our own child! For someone to accuse me of sleeping with her is not only wrong, it’s disgusting and irresponsible. Just because I am an athlete and I was portrayed as a bad person on bravo TV. Doesn’t mean I dont have a clue what life is all about.

We made a promise to that young girls mom, that We would take care of her and make sure that she was safe while she was in our hands. I will not sit here and take this bullshit without fighting back. Just because you’re extremely witty and intelligent, and know how to play the Instagram game. Doesn’t give you the right to use that platform to wrongfully accuse.

Not only is it irresponsible. It is dangerous and puts my family in harms way. We all make mistakes. This is not one of those times. My heart is broken for everyone involved. if you get anything out of this post. Get the truth.

Meanwhile, Nanny Carly, who has not, in fact, deleted her Instagram account, also responded, writing, “In the past week, allegations have been made about me which are not based in fact. I have not and never would participate in any action involving infidelity. I consider this a private matter in someone else’s marriage and will not comment on it further. I wish the entire family well.💛💛💛 #BeKind.”

Responding to comments on Instagram about photos of himself and the nanny together at a hockey game recently, Jim wrote, “I didn’t take her to an event by myself. Get your facts straight. I was with my best friend and his child. I was trying to do something nice for the girl who just had her boyfriend dumped [sic] her.”

Jim’s daughter Hayley Edmonds also chimed in, ripping her stepmom to Us Weekly, “I don’t know if I would say narcissistic but, she, like, creates her own problems and loves conflict and things like that. The selfishness is miserable for anyone to be around, let alone to be married to her.”