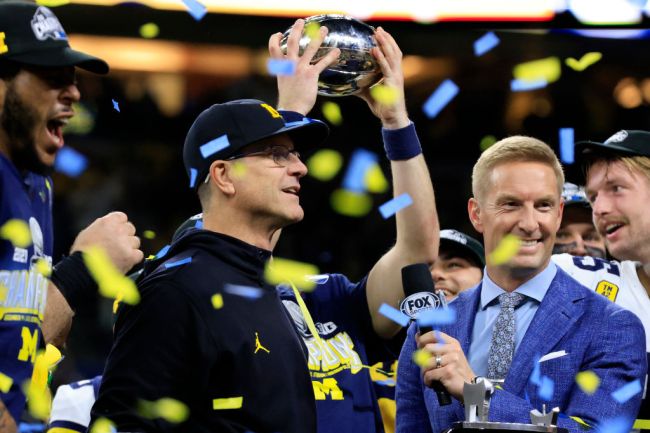 Over the last couple of days, it seemed like everything was pointing towards Jim Harbaugh making a return to the NFL. He had reportedly told a potential recruit that winning a Super Bowl was accomplishment he wanted to cross off his list.

Then a report surfaced that he was likely to be offered the Minnesota Vikings head coaching job and that he would take it. According to Adam Schefter, Harbaugh has informed Michigan that he would not be taking the Vikings job and would instead return to his job with the Wolverines.

Jim Harbaugh called Michigan to inform the school that, despite interviewing with the Vikings today, he will be returning to school for the 2022 season, sources tell ESPN. Michigan was, in the words of one source, “elated” to get Harbaugh’s decision.

This has to be a huge relief for Michigan as it is very late in the game to be searching for a head coach. Now Harbaugh can completely focus on building on his most successful season yet at Michigan.

The Vikings remain on the hunt for a coach they believe will be able to get them back to the playoffs after a pair of disappointing seasons. Schefter also revealed who the Vikings believe will be the man to lead them to the promise land.

The #Vikings are zeroing in on #Rams OC Kevin O’Connell as their head coach, sources tell me and @RapSheet. The deal can’t be finalized until after the Super Bowl.

O’Connell would land in a great situation. The Vikings’ offense is loaded with talent that will be expected to lead the team to the playoffs.

It didn’t take very long for the Vikings to find their answer after the Harbaugh news.