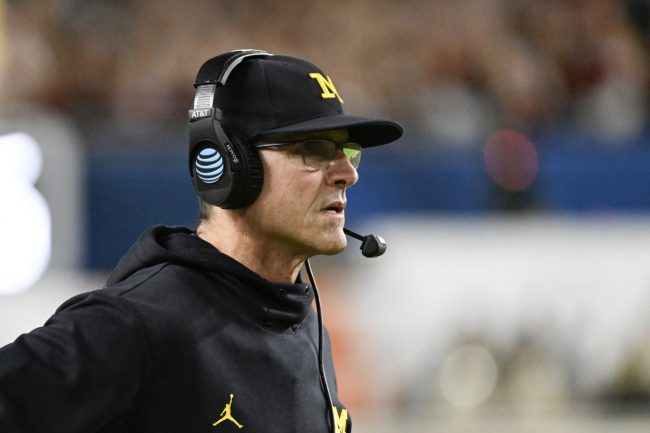 Michigan head football coach Jim Harbaugh has been linked to NFL jobs throughout the early goings of the offseason. However, per a new report, it might be more from his end than reality.

NFL Network’s Ian Rapoport joined the Pat McAfee show on Friday to discuss the rumors about Harbaugh’s latest song and dance with the NFL. Although Chicago has been floated in regard to the 58-year-old, no team has been as widely connected to Harbaugh as a candidate for a head coaching job than the Raiders.

In fact, per a recent rumor, Harbaugh is waiting for Las Vegas to offer him the job and plans to take it on the spot. Rapoport is not denying such an idea, but was not quick to confirm that the Michigan Man was getting on the next plane to Sin City.

While on the McAfee show, he said that the Raiders might have some interest in Harbaugh and that his name may have been mentioned within the organization. However, he said that Las Vegas has not directly engaged with Harbaugh, meaning that the organization has not reached out to him for an interview, it has not discussed the opening with him and it has certainly not offered him a contract.

It appears that most of the smoke is coming from Harbaugh’s side. Thus, Rapoport not-so-subtly suggested that he could be using the Raiders job opening as leverage to get a new contract extension from Michigan.

"I believe Jim Harbaugh would be interested in an NFL job.. I know the Raiders have some interest but they haven't engaged at all" ~@RapSheet#PatMcAfeeShowLIVE pic.twitter.com/mh14QXaOV3

Could Harbaugh be waiting on the Las Vegas job? Sure.

Does it appear as though Las Vegas is considering Harbaugh? Not right now.

Is there a good chance that these seeds are being planted by Harbaugh’s camp? It certainly seems that way.

Will this result in a fat contract with the Wolverines? Seems likely.