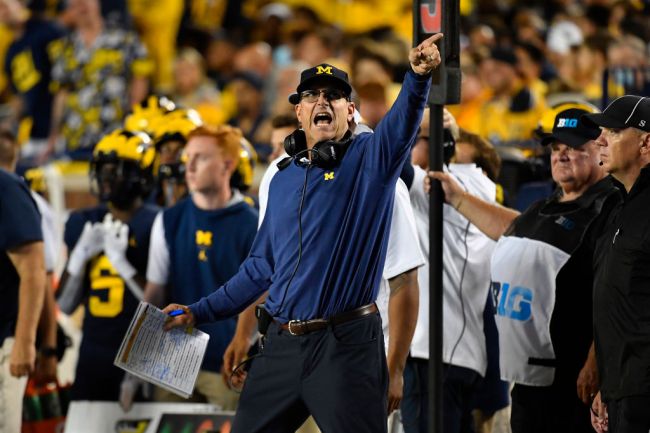 On July 22, 2021, Michigan football head coach Jim Harbaugh said that the Wolverines were going to beat Ohio State or “die trying.” And apparently he wasn’t kidding.

The obsession for Harbaugh has reached new extremes.

One thing that his team lacked in 2020 was physicality at the point of attack. To counteract some of that weak front, Harbaugh has included a new drill to practices.

The ‘Beat Ohio Drill’ is an iteration of the 9-on-7 drill that is used by many programs across the country. Although it is misnomered, because Ohio University is a MAC program that is not on the schedule, it’s intense.

During the ‘Beat Ohio (State) Drill,’ the offense lines up with five offensive linemen, two tight ends, one running back and a quarterback. The defense counters with its front seven.

Because there are no wide receivers, the offense runs the ball on the interior. The defense knows that.

Thus, being physical is key, and the players have turned it up a notch, says left guard Trevor Keegan.

“We blast some music, [breathe in] smelling salts, everything — it’s a pretty physical period, and we love it,” he said.

Right guard Andrew Stueber echoed his interior counterpart saying that “it’s definitely a great way to start practice, to get the pads popping and get the blood flowing.”

A 9-on-7 drill is common across all levels of the game— from Pop Warner to the NFL. Michigan ran the drill every day it was in pads during fall camp and is doing so every Tuesday during the season.

However, to put the focus on beating one singular program is a new wrinkle. Harbaugh is 0-5 in his career against tOSU and his obsession is just a little bit real.

Michigan wants to know what are their players doing to beat Ohio State today? New sign in their weight room. pic.twitter.com/q0QqFBXWfO

The Buckeyes did just lose to Oregon, so maybe this drill will be the difference in 2021? Probably not. 0-6 is coming.