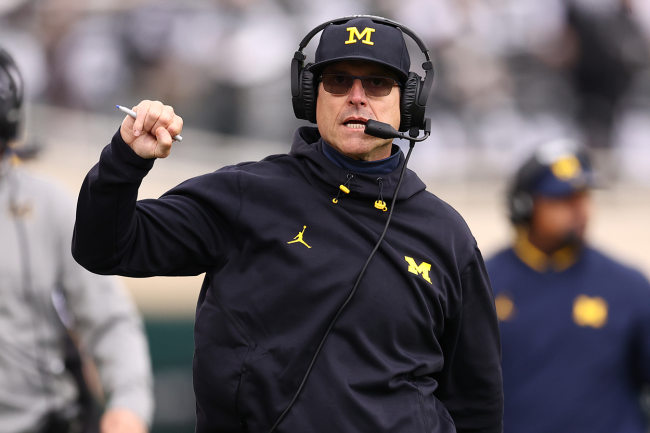 It is officially summer vacation in the college football world and Jim Harbaugh is taking full advantage. But that isn’t stopping him from getting in his daily workouts, even if it means finding an unconventional location to do so.

With just under two months until the start of the 2022 college football season, the recruiting dead period is currently in place. Coaches cannot contact high school recruits and summer practice does not get underway for about a month.

As a result, this time of year offers a rare opportunity for college football coaches to take some time to relax. Harbaugh is doing exactly that and took his family to Italy.

The Michigan head coach’s daughter Grace, who plays water polo for the Wolverines, has been documenting their trip. It looks like a beautiful place to take a deep breath.

how is this real😭

In addition to the scenery, Grace has documented her father along the way. It started with a hilarious look at Jim Harbaugh in ‘Vacation Mode’ and it really could not have been any more relatable. She also provided a peek at her father rapping Eminem that is as funny as it sounds.

From there, the Harbaugh family went on an adventure into a volcano. Jim was locked in the entire time.

“carve the body, shape the mind…the mountains do that”

And then when it was time for dinner, Grace filmed her father doing the ultimate dad walk— a solid 200 feet behind the rest of his family.

pls explain why this is a universal father thing

♬ i am fckin crazy – tan

A few days later, Grace caught Jim Harbaugh in the middle of a vacation workout.

He was getting in his planks and lunges— all while wearing his famous khakis. It was perfectly on-brand.

and in the khakis??? i don’t wanna hear nothin ‼️‼️

♬ Did It On’em – Nicki Minaj

However, it does raise one question— Jim got after it in the middle of the hallway… why?

Did the hotel not have a gym? Did it not have a courtyard? Was there not enough space in the room?

We may never know the answer to this completely unimportant question, but it is one worth asking. You can’t knock Harbaugh’s hustle and these videos of him in full dad form are admittedly making him a lot more likable. Shoutout to Grace for the inside look.