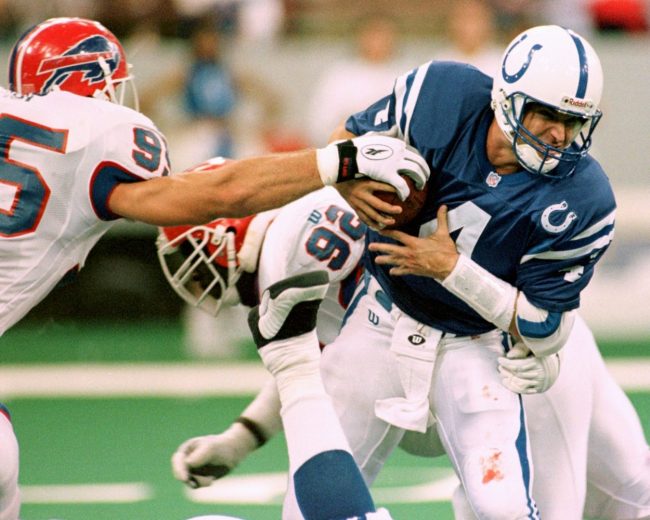 Jim Harbaugh is one of the most disliked personalities in football. However, after seeing an old video of him play through pain during his quarterback days, it’s hard not to give him credit where credit is due.

During the 1995/96 AFC Divisional Round, the 9-7 Colts rolled into Arrowhead Stadium to face the 13-3 Chiefs. At quarterback for Indianapolis was Harbaugh, a eighth-year quarterback who was drafted in the first round of the 1987 NFL Draft.

Entering the game, Harbaugh achieved career highs in completion percentage (63.7%), passer rating (100.7), and touchdown passes (17). He was playing good football and if the Colts were to go all of the way, a Cinderella run out of the Wild Card was how it was going to go down.

And it almost did. Indianapolis beat Kansas City in a low-scoring 10-7 affair. During the game, Harbaugh gained a lot of street cred.

The 58-year-old head coach of Michigan football is easy to make fun of. Not only does he coach the Wolverines, but he doesn’t do himself any favors from a likability standpoint.

An old video that has resurfaced from the 1995/96 playoff game might cause people to gain some new-found respect.

At kickoff between the Chiefs and Colts on January 7, 1996, the temperature hovered just barely over zero degrees. With the wind chill, it felt like -15 degrees. When it is that cold, any and all contact hurts.

Especially when you get rocked like Harbaugh did by a pair of Chiefs defenders out for blood. After taking a vicious hit, Harbaugh walked over to the sideline and was clearly uncomfortable as he literally coughed up some blood.

Jim Harbaugh coughed up blood in -15 wind chill after a big hit. Harbaugh would stay in the game, the 9-7 Colts beat the 13-3 Chiefs in the 1995 Divisional Round. pic.twitter.com/ehadTqpDEn

The fact that Harbaugh was coughing up blood did not keep him out of the game. He stayed in there like a baller and went on to lead his team to victory.

Like him or hate him, you have to give him credit. That’s hard.