Jim Brought Pam’s Ex From ‘The Office’ To Game 7 Of The Stanley Cup Final, But She Shut Him Down With Perfect Responses 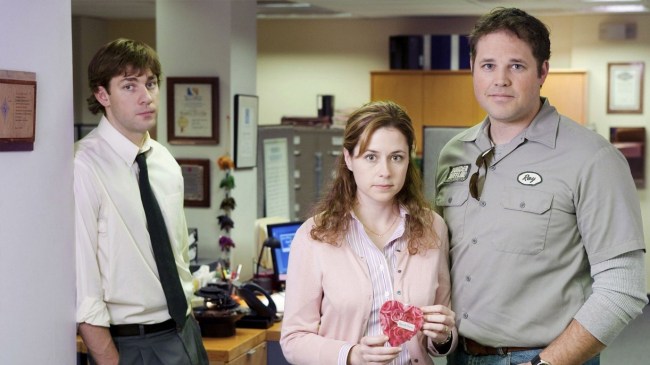 When it was officially determined that the Boston Bruins would be taking on the St. Louis Blues in the NHL Stanley Cup Final, one of the first things fan of The Office realized was that the series was going to be a Jim vs. Pam affair.

Two other people who quickly realized that were none other than the people who played Jim and Pam, John Krasinski and Jenna Fischer. Also… Stanley Cup?

The two of them each hit up social media to trade a little trash talk before Game 1, starting with a tweet by Krasinski.

On it went from there with the two of them trading friendly barbs throughout the series.

Uh oh.@johnkrasinski Looks like Pam might be going home with Stanley. Who would have guessed! #StanleyCup #LetsGoBlues

Wow... this is how you wanna play this Fischer?... ok. Game ON! #BruinsIn7 #StanleyCup https://t.co/UP3lLkkd2X

Jenna has a message for John: "It is MY turn!" #StanleyCup pic.twitter.com/AS7r2vBKNH

Even their boss Michael Scott (Steve Carrell) got in on the Stanley Cup trash talk.

Soooooo... I should invite someone else to game 7? https://t.co/3vMH7qSB3w

Turns out Krasinski was subtly referring to this tweet by Fischer prior to the series starting.

@David_Denman I need to know who you are rooting for. @StLouisBlues @NHLBruins This is important.

Because Wednesday night… this happened.

If only you’d have called msjennafischer Sorry. May the best team win! @nhl https://t.co/DAyi8ZrVLA

Fischer, however, ended up getting the last laugh… in more ways than one.

Well, a big congrats to everyone in St. Louis. A tough loss, but a momentous occasion! Great series! Next time Fischer... next time. @NHL #StanleyCup https://t.co/o5FnBOmXiL

Congrats #STLBlues, and of course @jennafischer! What a great playoff!

Score one for Miss Pam Beasley.