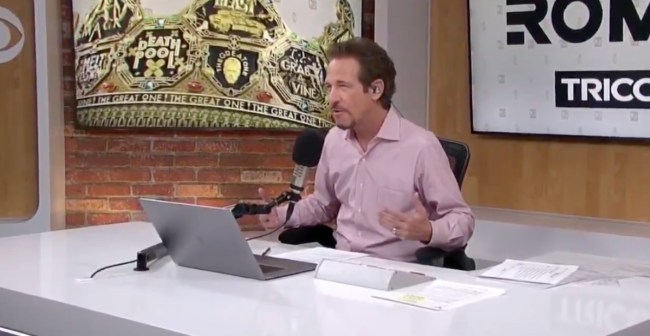 Jim Rome’s radio show is telecast on CBS Sports Network every weekday from noon to 3 PM EST, but you won’t be able to watch Thursday’s full show nor Friday’s.

Why? Because his show is getting bumped for swimming and he’s not happy about it.

“You idiots are going to preempt the show for swimming? Stupid,” Rome said.

The funniest part of the clip is Rome immediately realizing that calling the network that graciously streams his radio show ‘stupid’ and ‘idiot’ may not have been the wisest of moves.

Rome, seconds after calling the network idiots for bumping his show for actual live sports, says “I don’t have a problem with it, I mean, I don’t.”

“What I really can’t control is what the CBS Sports Network does during these hours and I don’t have a problem with it. I mean, I don’t,” Rome explained.

“They have other properties. Other things they have in addition to the Jim Rome radio-slash-TV show. Including swimming. So yes, on the TV side we are going to go away for hours two and three. And you will get swimming instead of me. Maybe that’s an upgrade in your mind. Maybe it’s an upgrade, period.”