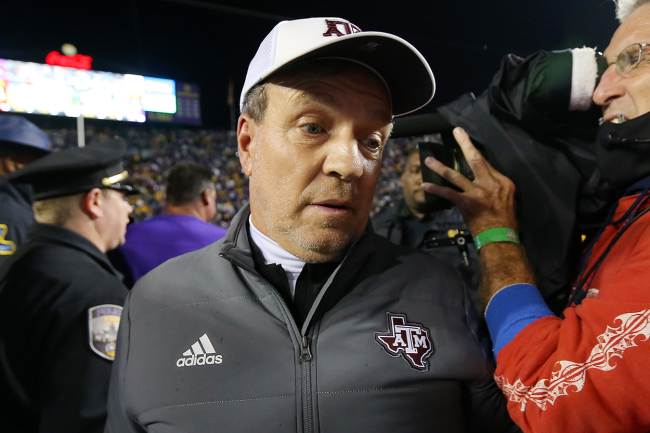 Back in February, Texas A&M landed the greatest recruiting class in the history of college football after going 8-4 in 2021. On that day, head coach Jimbo Fisher made it very clear that NIL had nothing to do with the Aggies’ success in recruiting.

Now, almost three months later, he is saying otherwise. He is completely contradicting himself.

During an appearance on The Rich Eisen Show, Fisher discussed the current landscape of Name, Image and Likeness. Although he did speak some truth, he also continued to spin a false narrative that comes with quite a bit of irony, considering how much A&M has reportedly spent on recruiting.

Here is what Jimbo Fisher said about allegations of Texas A&M using NIL as leverage over other programs to gain a competitive advantage over other schools in recruiting:

“There are NIL [deals available in College Station], it’s probably less than most schools across the board,” Fisher said. “You can look our state law, we’re not allowed to do that and plus the results of who has [NIL deals] are out there. So we’re way below most of everybody else and where they’re at.

That isn’t entirely true. Fisher is right that A&M has recruited well since he arrived in College Station, but the Aggies have finished less than sixth, twice.

So yes, Texas A&M has recruited well since Fisher’s arrival. But he got his numbers wrong. And, as he has said himself, money played a factor in recruiting before NIL — so there is a chance that the bank accounts opened up in College Station upon his hiring — especially considering that there is a direct correlation between A&M’s recruiting success and the price of crude oil.

In addition, Texas state law does not make much of a difference, if any, in regard to what A&M can or can’t do with NIL. Sure, the school itself cannot broker deals directly, but that opened the door for third-party collectives.

Here is what Stewart Mandel of The Athletic recently had to say about A&M and NIL:

Many states’ NIL laws adopted last summer prohibit schools from directly brokering deals. That opened the door for third-party collectives — organizations that pool fan and booster donations in order to compensate a specific school’s athletes. Boosters at a small handful of programs — Texas A&M, Texas, Tennessee, Oregon and Miami chief among them — mobilized the quickest when the NCAA allowed NIL compensation for the first time last July. But they are far outnumbered by exasperated coaches and administrators who fear their programs getting left behind. Many have lost recruits simply because another school’s collective offered an NIL package it couldn’t match.

Does that sound like Texas A&M is at a disadvantage?

Fisher then went on to discuss his comments on National Signing Day, when he got very upset and very defensive over the idea that Texas A&M used NIL to land its 2023 class.

Here is what Jimbo Fisher said about his blow-up over recruiting and NIL on February 1st, 2022:

“We’ve always been able to recruit well and I think, you know, is NIL a part of our world? Is it a problem in recruiting? It can be. The portal, all that’s going to be a problem, but people were insinuating that’s the only reason we got our [No. 1 class], that’s what I said,” Fisher said. “That was the only issue I had with that whole thing. That is not it. Those are facts that are on the record that you can look up.”

Actually, that is not what Fisher said. He said, verbatim, “[NIL] had nothing to do with this class, this was hard work by out staff … it’s insulting to the kids that come here that you insinuate that.”

So…. yeah… what he said on the Rich Eisen Show is not what he said on signing day. He said in February that money didn’t have single thing to do with Texas A&M’s recruiting class, not that he was upset over people insinuating it was the only reason that Texas A&M landed the No. 1 class.

That may sound like a minor detail, but it speaks loudly and it’s actually a big distinction. Initially, Fisher said money was not a factor at all whatsoever. Now he is saying it was not the only reason A&M landed its class. Two very, very different things.

However, an 8-4 team from a year ago just out-recruited every class in history after NIL became legal and Fisher is the one complaining. Hm.