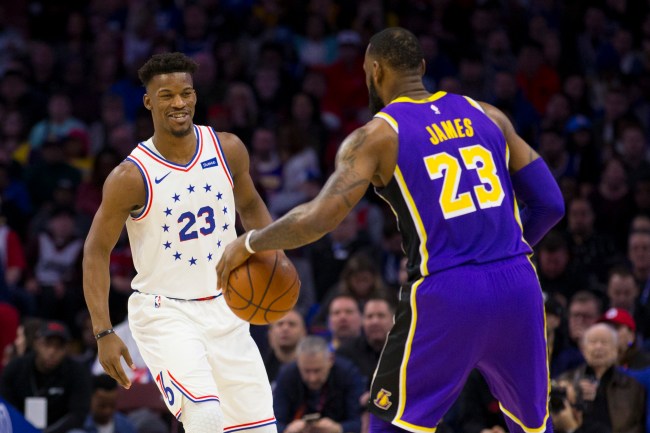 Jimmy Butler may not be one of the top-flight free agents in the NBA this offseason — that distinction’s usually reserved for more prominent names like Kevin Durant, Kawhi Leonard and Kyrie Irving, among others — but there’s no doubt that the four-time All-Star would be a great complement alongside another superstar. One of those superstars? LeBron James, who reportedly has already pitched Butler on the idea of joining him this summer on the Los Angeles Lakers — and Jimmy Butler seems to be receptive to the idea.

According to the L.A. Times‘ Arash Markazi, Jimmy Butler “would love” to play for the Lakers, and, per Markazi’s sources, Butler would join the Purple and Gold “in a second if they offered him a max deal.” The report came during an appearance on Colin Cowherd, with Markazi saying this to the host when asked about what star player would realistically sign with the Lakers.

“Jimmy Butler,” Markazi told FS1’s Colin Cowherd without hesitation when asked which players could realistically join the Lakers. “If they can give him a max deal, he would love to play here. The Clippers, from what I’ve been told, do not want to sign him. They think they’re gonna have a big summer. They’re gonna turn a little bit of a corner here, because they think they’re gonna get Kawhi and I think they have a real shot for KD — and if they get those two, my goodness.”

You can take a look at the clip from the discussion below.

When @ColinCowherd asked me this morning on @TheHerd what star player the Lakers could realistically sign, I didn’t waste any time saying Jimmy Butler. He likes L.A, LeBron James has been in touch with him and he would join the Lakers in a second if they offered him a max deal. pic.twitter.com/wXStzcAFzh

All of this is pretty interesting, to say the least. While there are tons of rumors about which player might go where this summer — which could be the wildest in NBA history — Jimmy Butler joining LeBron James on the Los Angeles Lakers seems like a perfect fit. The small forward can defend, create his own shot and definitely isn’t afraid of the big moment or pressure, presumably, making him the ideal Robin to James’ Batman. Will it happen? Who knows, but it does seem like Butler’s already thinking about what’s next.

The fact that Jimmy Butler posted that after the Philadelphia 76ers were eliminated in the NBA Playoffs is a clear indication that he’s in the mindset of leaving town. Whether or not it means he’s joining the Lakers is TBD, but the latest report seems like it has some serious weight to it.