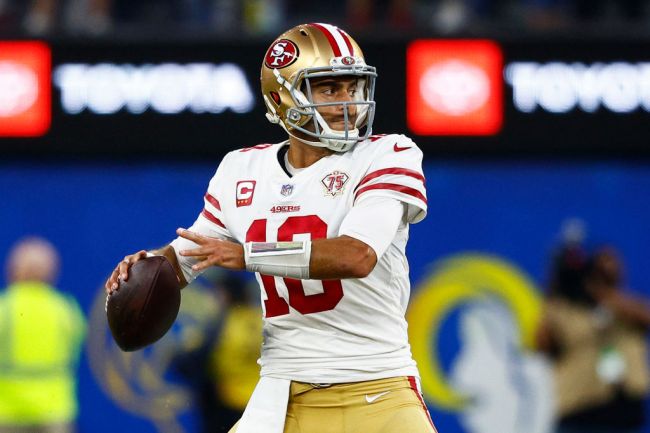 When Baker Mayfield was traded to the Carolina Panthers it seemed like Jimmy Garoppolo would be stuck as the backup quarterback for the San Francisco 49ers for the next season. Then a few days ago, a report surfaced that there could still be a team interested in his services, albeit still in a backup role.

There was reportedly interest in Garoppolo joining the Tampa Bay Buccaneers. Today, Garoppolo’s agent stated that the rumor was completely false.

I asked #49ers QB Jimmy Garoppolo’s agent, Don Yee, about Garoppolo’s shoulder, the status of trade talks and a radio host’s recent comments that the #Bucs had reached out about acquiring Jimmy G as the heir apparent (again) to Tom Brady. Yee’s response: pic.twitter.com/kINdUZR9qK

“He’s progressing well and on schedule. We’re optimistic about the upcoming season. Over the weekend, a report came out that asserted that I had spoken to a media member about his future, but the report was false.”

It’s hard to see why Garoppolo or the Tampa Bay Buccaneers would have been interested in this move to begin with.

The move wouldn’t really change Garoppolo’s situation at all. He’d just be backing up Tom Brady instead of Trey Lance.

The Bucs also have just about no reason to want to trade for Jimmy Garoppolo. Tom Brady is their starter for this year and they are set to have Blaine Gabbert as their backup for just $2.25 million next season. Bringing in Garoppolo, who will make over $25 million this season and then become a free agent doesn’t seem like something they should have much interest in.

Instead, it seems Garoppolo will need to just wait out this season as the backup for the 49ers before he can try to find a new team in free agency where he can be the starter next season.