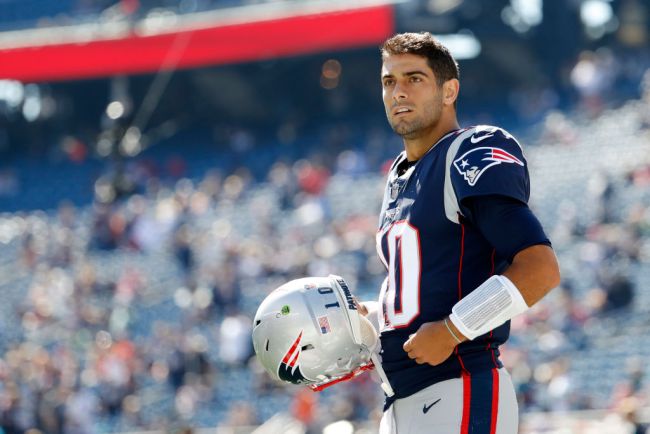 With the 49ers making a trade with the Dolphins to acquire the No. 3 overall pick in the upcoming NFL Draft, the writing appears to be on the wall that Jimmy Garoppolo’s time in San Francisco is coming to a close. Moving up to the No. 3 spot in the draft all but guarantees that the 49ers will be drafting a quarterback in that spot.

One potential landing spot for Garoppolo could be his old stomping grounds in New England but based on some recent comments made by a former Patriot, New England may not be all that interested in bringing him back into the fold.

Former Patriots tight end Jermaine Wiggins recently joined ‘The Greg Hill Show‘ and revealed that the team had its doubts about Garoppolo, specifically his ability to be dependent and remain healthy.

“My sources here tell me, and I didn’t really want to say this, but they used to look at Jimmy G. a little sideways,” Wiggins said. “Like, he was kind of a little bit Mr. Glass. And I am not talking about the Sam Jackson character, where they were like, ‘Can’t really depend on him. Can’t stay on the field.’ Between the lines they looked at him like, ‘Can we really count on this dude?'”

Wiggins’ statement about being concerned with Garoppolo’s ability to remain healthy check out, given the fact that Garoppolo started two games for the Patriots in 2016 before suffering a shoulder injury. New England then traded him to San Francisco where injuries have continued to plague him.

Despite all this, we can’t forget that Jimmy G led the 49ers to a Super Bowl appearance just two seasons ago, there will be suitors for the 29-year-old when San Francisco does ultimately decide to part ways with him.