Jimmy Garoppolo Got $79,000 Because The Patriots Made The Super Bowl 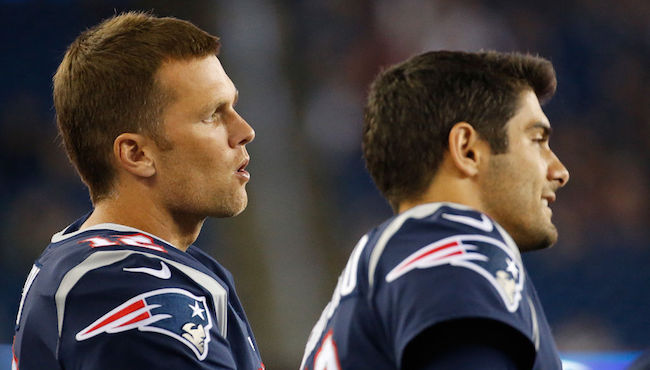 On Sunday, the New England Patriots surprised literally no one who has seen a Patriots game in the last decade when they mounted a fourth-quarter comeback to crush the hopes and dreams of the Jacksonville Jaguars and any NFL fan who was dreading having to watch Tom Brady try to win another Super Bowl. This is the eighth time the team has secured a spot in the Big Game since the start of the Brady Era, which some fans thought was coming to an end when they called for the quarterback to be benched in favor of Jimmy Garappollo after a rocky start to the season.

However, any rumors of a potential regime change were squashed when the Patriots sent Garappollo to the 49ers in a trade that shocked pretty much everyone. The former heir apparent is undefeated in his first seven starts in San Francisco, and while the QB might now be the future of another franchise, he’s still reaping the benefits of the Patriots’ success.

According to Adam Schefter, Garappolo’s contract may have been transferred to another team, but he is still eligible to receive the bonuses that come with the Patriots advancing through the playoffs. As you can see, this means he’s getting paid more to do literally nothing than most people will ever make in a year.

For New England’s playoff wins and trip to Super Bowl LII, $79,000 in bonuses will be paid to 49ers’ QB Jimmy Garoppolo.

Meanwhile, I’ll be spending my Super Bowl Sunday getting super stressed about my $10 bet about the color of the Gatorade that gets dumped on a coach at the end of the game.