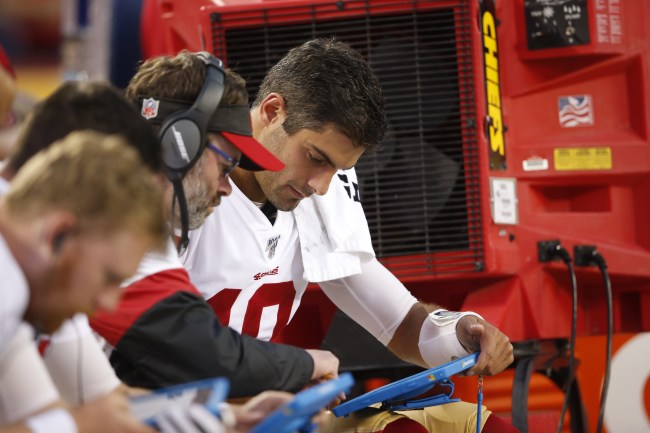 Jimmy Garappolo is out here trying to bend reality to control the narrative.

After suffering a torn ACL in week 3 of last year, the 27-year-old has been trying to dust off the cobwebs this preseason with  limited success.

Less than a week after making headlines for throwing five consecutive interceptions in practice, Garappolo made his game action debut against the Broncos and posting the following statline: 1/6 for 0 yards, an interception, and a quarterback rating of 0.0.

Jimmy G bounced back the following game against the Chiefs after playing the whole first half and completing 14-of-20 passes for 188 yards and a touchdown. Niners fans were able to breathe a sigh of relief.

But still, questions remain about the quarterback’s ball security and expectations are sky high for a guy who signed a record 5-year, $137.5 million contract to resurrect them from the depths of 4-12.

Garappolo was asked to answer for some of the questionable throws he’s made this preseason and he threw the onus on the wide receivers.

He said via NBC Sports:

“A big part of that is it still being preseason, or in practice, you try things like that. You know, during a real game, you wouldn’t make that throw or that decision, but there’s a trust factor between quarterback and . . . whoever’s catching the ball. The more you try those things, you see who’s going to make the play for you in a crucial situation.”

Hey Jimmy, no one would blame you if you just admitted to knocking off the rust.