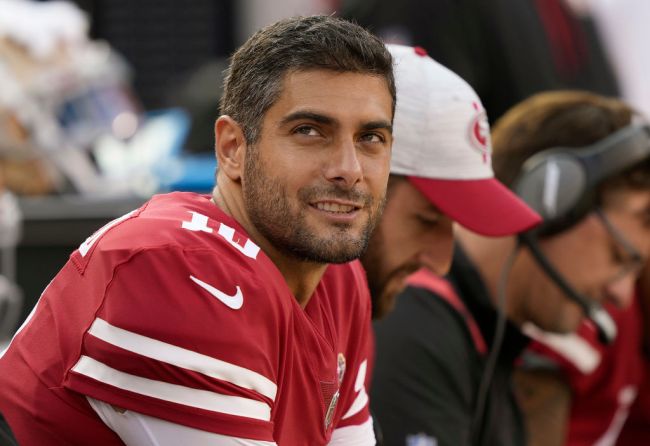 Now that Week 1 of the NFL preseason has concluded, there is one thing that is clear— the quarterback competition in San Francisco remains a storyline to watch. Despite the back-and-forth between incumbent starter Jimmy Garoppolo and rookie Trey Lance, the two 49ers quarterbacks are staying in good spirits.

When a veteran and a rookie are battling for the same starting position, it can often times result in a disgruntled relationship. That is not the case in The Bay.

Garoppolo, who was named the starter by head coach Kyle Shanahan in the offseason, and Lance are big supporters of one another and it showed on Saturday.

Lance, making his NFL debut, threw an 80-yard touchdown on his second-ever throw in the league. Garoppolo lost his mind on the sideline.

It seems almost inevitable that Lance will take over under center at some point in the next few years. However, for right now, it’s Garoppolo’s job to lose and he’s going to continue to support his young potential predecessor.

“I don’t know what you’re talking about awkwardness,” Garoppolo said earlier in training camp. “No, it’s me and Trey, we’ve had a good relationship. We really have. It’s sort of one of those things. It is what it is. This business is weird, but you know, at the end of the day we’re in that locker room, we’re around each other so much that, you know, it’s just business.”

“Yeah, it’s been awesome,” Lance said, via KVRR in Fargo, ND. “He’s a great guy. I mean, one of the best people I’ve been around.”

Regardless of what happens, the quarterback room in San Francisco sounds like it’s not soon to crumble….

Except Josh Rosen. He is bad.