J.J. Watt Reportedly Got Into A Heated Argument With Bill O’Brien And Openly Questioned O’Brien’s Coaching Abilities Before Firing 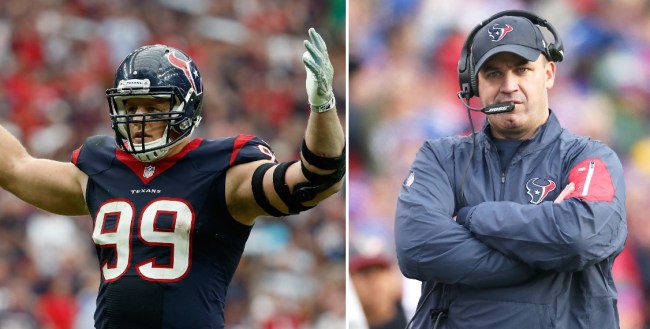 It appears that JJ Watt may have been responsible for forcing the Texans into finally firing head coach Bill O’Brien.

On Monday it was announced that O’Brien was being let go as the team’s head coach and GM.

According to a report from ESPN Houston radio host John Granato, Watt had gotten into a heated argument with O’Brien last week during practice which led to a revolt among players against O’Brien.

A source tells me that JJ Watt and Bill O’Brien had a heated exchange on the practice field the week of the Steelers game in which JJ called BOB out for his coaching ability. It began a player revolt that ended up getting BOB fired.

On Tuesday Watt posted a picture of the sun shining through NRG stadium which many felt was his reaction to O’Brien’s firing.

Update: The Houston Chronicle’s Aaron Wilson has confirmed Granato’s report and claims O’Brien also got into an argument with defensive coordinator Anthony Weaver as well as other coaches during practice.

Bill O'Brien got into an argument with defensive end J.J. Watt and defensive coordinator Anthony Weaver on the practice field along with verbal altercations with other staff members during his final weeks as coach-general manager before being fired, according to league sources