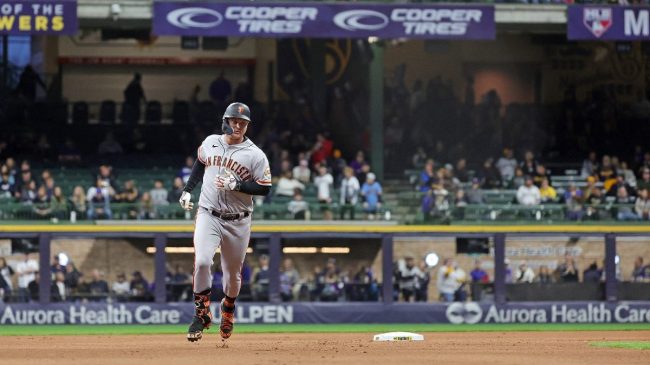 Joc Pederson delivered the most suitable “F You” to a couple of Milwaukee Brewers hecklers on Monday night.

The San Francisco slugger was hounded by the words of a few fans in the stands of American Family Field (not the most fitting name for this instance), but he responded in the most emphatic way possible.

The lefty stepped up to the plate with his team trailing 1-0 in the top of the eighth inning. A barrage of insults soon followed. The verbal bombardment got so bad that Pederson actually stepped out of the batter’s box and turned to find the fan in the bleachers.

As he does, a loud uproar from those pestering attendees was heard. It would soon become very silent.

Public enemy no. 1 in Milwaukee 😈

That had to feel good.

Pederson launches a 1-0 pitch off the scoreboard in center field. The towering drive put his team up 2-1 and he was quick to celebrate on his trip around the bases.

Pederson immediately turns back towards the fans and pounds his chest in ferocity before trotting down the line. He then flashes the Superman celebration made famous by Cam Newton as he rounds first.

Pederson puts an exclamation mark on the homer with a stomping of home plate and some words of wisdom for the Brewers hecklers.

The Giants star yells, “Do it again, f—ing p—y,” as he touches home amid a myriad of boos.

He was asked about the incident in an interview after the game, and he gave the most honest response of all time.

Reporter: “The fans, were the heckling you? What was going on?

Pederson: “Yeah, they were talking s–t. What are you gonna do? Got me a little fired up.”

San Francisco would win the game 4-2 to improve to 12-5 on the season. Milwaukee fans might be a little quieter next time Pederson and the Giants come to visit.