With Joe Biden Set To Throw Out A First Pitch In April, Can He Join The List Of The Best? 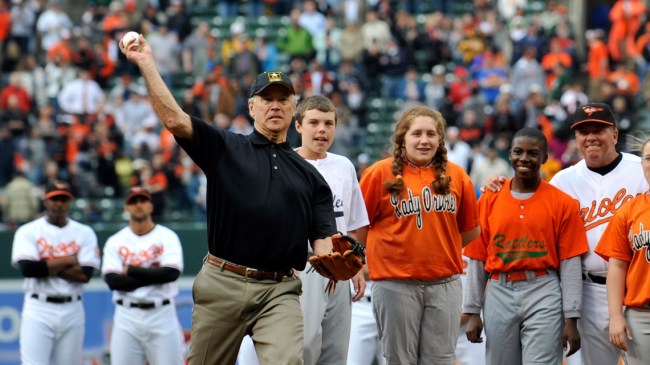 Throwing out the first pitch at a Major League Baseball game is an honor that has been given to American presidents for quite some time and after the 2020 election results were declared in favor of President Elect Joe Biden, the Washington Nationals extended an invitation to continue the tradition. The 77-year-old is set to toe the rubber for the team’s Opening Day in 2021, when the team is set to face the New York Mets in the nation’s capital.

Former Vice President Biden is no stranger to the pitcher’s mound, and threw the first pitch at a Baltimore Orioles game in 2009, when he was serving alongside President Barack Obama. 66 years old at the time, he tossed in a solid ball on a straight line over the plate. It might have been a little bit high, but it was a solid effort.

President William Howard Taft was the first to throw out a first pitch at a baseball game in 1910 and hoped that having the president at a game would encourage others to enjoy such a “healthy amusement.”

Per Sports Illustrated, “the first first-ball pitcher was a portly right-hander from Cincinnati named William Howard Taft, who threw from under a tall silk hat his first time out. The year was 1910, and Taft opened the baseball season at the request of Ban Johnson, president of the American League. Johnson thought the Presidential appearance would give a lift to sagging attendance, and it did. Twelve thousand fans — a record Washington turnout — were on hand to cheer Taft and the baseball Senators. Although Taft‘s ample girth was not prohibitive for a pitcher, as Fred Fitzsimmons and Hugh Casey later proved in competition, he was wild. Having shed his gray kid gloves, he wound up and let fly towards Catcher Gabby Street, who was waiting at home plate. To everyone’s surprise, the ball sailed off to starboard and into the glove of Pitcher Walter Johnson, who was observing the event from the mound.”

Every sitting president since, with the exception of No. 45, has thrown out a first pitch in Washington D.C. whenever the city housed a team, or elsewhere around the country. President Trump declined the franchise’s invitation in 2017, but has previously thrown out a couple of first pitches in his lifetime. The most memorable came in 2004, when the then-business mogul landed his private helicopter in center field and gave his best effort prior to a Somerset Patriots game, an independent league team based in Bridgewater Township, N.J.

Some previous administrations even threw more than one, like President Obama, who gave a solid effort his first go at the 2009 All-Star Game in Saint Louis but squandered his second effort.

A year later, he donned his hometown Chicago White Sox hat and air-mailed one to open the Nationals’ season.

Prior to Presiden Obama’s time in office, President George W. Bush also gave two heaves to the plate during his eight-year term. The most recent came in 2005 in front of the District’s home crowd.

His first, however, might be the greatest Presidential pitch of all time. It is certainly the most memorable. Just over a month following the terrorist attacks on 9/11, President Bush took the mound in front of a sold-out New York Yankees World Series crowd. The city had been through so much and the perfect strike could not have been written any better.

Another of the best pitches came from President Bill Clinton in 1994, who began the Indian’s home opener with a confident 0-1 count.

President Jimmy Carter also had the honor before a World Series game in 1995 and put it on a rope.

His predecessor, President George H.W. Bush, played baseball at Yale and reached two College World Series. The bar was set high and he lobbed one in there. It was a bit high and outside, but maybe he didn’t want to show off.

We will have to wait until April to see President Elect Biden let one rip. Can he still put a little bit of mustard on the ball? Only time will tell!