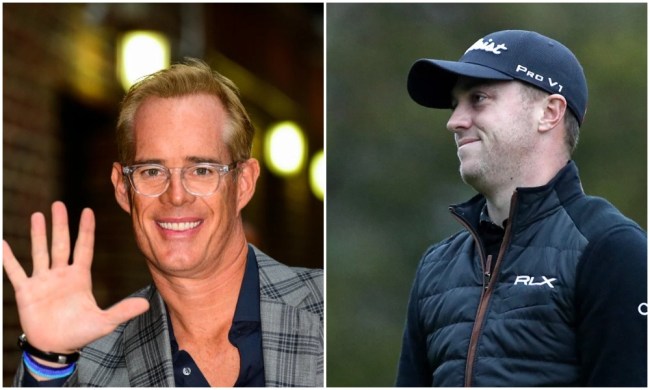 With the entire sports world on pause at the moment, not only is it us fans and athletes stuck inside twiddling our thumbs and binging Netflix, but sports announcers have also been left with practically nothing to do for the foreseeable future.

For Joe Buck, who would normally be announcing MLB games right now for FOX and beginning to gear up for the U.S. Open in June, he’s resorted to showing off his play-by-play talents over completely random videos. He broke down a video of a kid trying to kill a spider in the house and even a video of chickens on a seesaw, but his most recent victim is Justin Thomas and his unfortunate hairline.

He prefaces the video by saying that JT is one of his favorite players on the PGA Tour and that receding hairlines are found on the domes of plenty of men around the world before poking a little fun at Thomas trying to make the most out of his hairline.

Here’s my buddy @pgatour player @JustinThomas34. Is this the most captivating video? No. Is it relatable to 75% of the men that will see it? Yes. Yes, it is. Justin, we can DM about who to go see. Also, I did the @JordanSpieth line per your request so now make a donation! pic.twitter.com/bwzAhCgPyB

This is what the sports world has evolved into over the past few weeks. At least videos like this give us a bit of a smile during these weird and strange times.