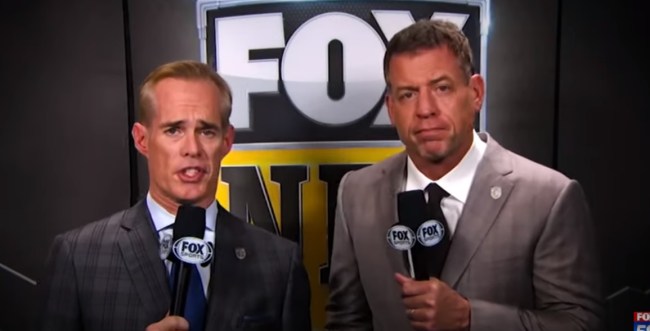 It appears that someone over at FOX Sports doesn’t like Joe Buck and Troy Aikman.

Earlier this week a video of Aikman and Buck mocking pregame NFL military flyovers went viral on the Internet. And people were very upset.

According to Sports Illustrated media reporter Jimmy Traina, the video was not a “hot mic” moment during the broadcast but was actually from a pregame rehearsal that was not aired on TV which means a FOX Sports employee must have leaked it onto the Internet.

They were not caught on a hot mic. This did not take place during a break in the Packers-Bucs game.

This was done before the game, during a rehearsal. That means someone who works at FOX, either in a truck or a broadcast studio, pulled the clip on purpose and then leaked it on purpose to make Buck and Aikman look bad. And the fact that one of their co-workers would leak this clip to make the broadcast duo look bad really sucks.

You can be sure Fox is doing some sort of internal investigation to find the culprit.

Aikman has since clarified his flyover comments and Buck will address the situation during his podcast later this week according to Traina.

I love a flyover but It was odd to see one over a mostly empty stadium but I am an unwavering patriot that loves this country, has always respected our flag, supported the men and women in the armed forces as well as those in uniform who serve & protect and for anyone to suggest

Related: Why Military Flyovers At NFL Games Aren’t As Big Of A Waste Of Taxpayer Money As Joe Buck And Troy Aikman Think