Crazy Freeze Frame From Insane Joe Burrow Run Vs. Chiefs Proves That He Is A Wizard (Video) 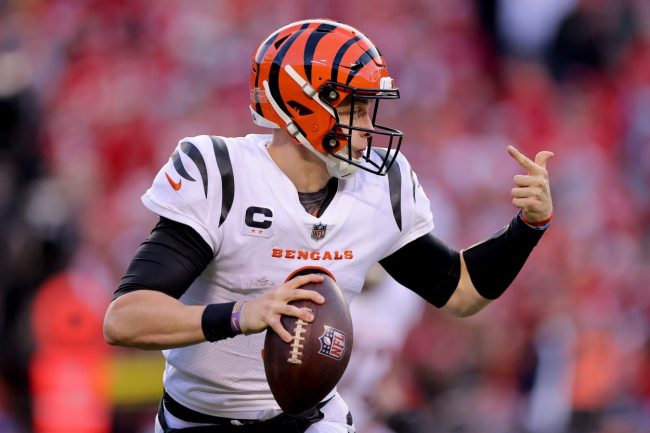 Jackpot Joe, Joey Franchise, Joe Cool, Smokin’ Joe, Joe Shiesty, Joe Brrrr— whatever you want to call him — Joe Burrow is a remarkable football player. The 25-year-old, second-year quarterback out of LSU rolled into Kansas City on Sunday and brought the drip.

When it came time to play, he was ready to go. After falling behind 21-3 in the second quarter, Burrow and the Bengals scored 18 unanswered points to tie the game before the fourth quarter.

With just under 12 minutes left in the fourth quarter, Cincinnati had the ball deep in their own half and was trying to drive and take the lead. Burrow looked to pass on 3rd-and-7, but the pocket quickly collapse on top of him and it looked like Kansas City was going to record the sack and force a turnover on downs.

Not on Burrow’s watch. After nearly getting brought down for a loss of seven, the young quarterback escaped the pressure and took off up field for a first down.

In real time, the run is very impressive. However, when you slow it down and get a better look at how much trouble Burrow was in, it is absolutely insane.

A freeze frame from the broken play run shows three Kansas City defenders closing in on Burrow. One of them was completely unblocked and had both of his hands on Burrow. If you didn’t know what happened next, you would guess that it was a sack. And 99.99% of the time you would be right.

Just not on Sunday. Take a look:

How did Burrow escape this?! 🤯 pic.twitter.com/u7njPXQrwx

Burrow is so good at escaping the pocket. The fact that he did not get sacked despite the circumstances is truly incredible. To make things even better, the Bengals added three points from the drive and took the lead.